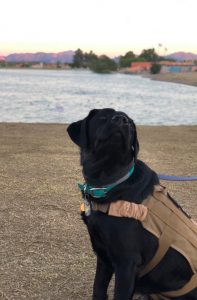 Lilly Beatty is K9 for Camo’s 2020 hero dog of the year. Lilly is a four-year-old black lab who has had a fantastic impact on her owner Devin.

Devin Beatty is a veteran who served from 2009-2013. He did two years of active duty and four years in the reserves. He’s currently a travel nurse in Jefferson City, and he lives in Sparta with his wife, Samantha.

Devin says he wanted to be a nurse the moment he got out of the military. He started at Missouri State University, and about a semester and a half in, he almost dropped out of school. Then, he got Lilly.

“If it weren’t for Lilly, I wouldn’t be a nurse,” Beatty said. “She did all the work and got me to nursing school. She’s the hero here. I’m not.”

Devin has PTSD and epilepsy, and says his service dog has changed and saved his life.

“She knows how to relieve my anxiety,” Beatty said. “She can read my seizures. Back when I was having seizures, and I’m now in remission.”

Lilly also knows when Devin is going to have a panic attack. When he’s out in public, Lilly makes him feel safe and secure.

Springfield batman Derek Smith presented Lilly with the award this morning on Zoom.