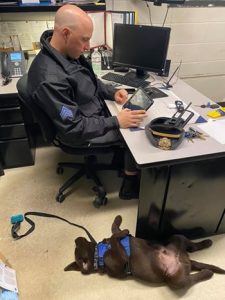 It’s not unusual for a police department to have a K-9 “comfort” dog. They’re used to help victims of crime deal with anxiety, stress and PTSD, and they often visit schools, hospitals, nursing homes and other places in the community in order to boost morale. But one K-9 has gone viral for an especially adorable reason.

Brody is actually the first-ever comfort and therapy dog for the town of Bristol. He was donated to the department as a gift from Boonefield Labradors, a breeder based in New Hampshire. Since then, he’s been making the rounds around town.

On April 21, for example, he delighted residents at Saint Elizabeth Manor, a local nursing home. They were happy to see Brody’s friendly face during his “window visits.”

(Even comfort dogs have to adhere to social distancing measures.)  All the attention clearly zapped Brody’s energy, however, and soon he was back doing what he does best — having a snooze:

It’s not just residents of Bristol who have fallen in love with Brody. In addition to trending all across the United States, the Lab’s cuteness has been appreciated all over the world, including in London, where the London Evening Standard shared the swearing-in video on their social media pages, along with the caption, “Working with K-9 Brody is a dream!” They layered Brahms’ “Lullaby” over the video.

Brody even has his very own Instagram account, and he’s garnered more than 8,700 followers since he started his position as Bristol’s therapy/comfort dog-in-training.

And as you might expect, there are plenty of photos of him napping.