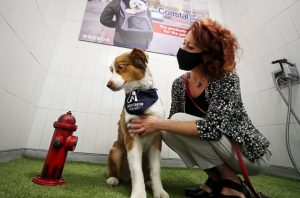 One obvious sign is a $34 million gate modification project nearing completion that includes a new concourse packed with amenities for moms, business travelers and passengers in general.

On Wednesday, Camacho demonstrated that the airport’s commitment to customer satisfaction extends beyond its human clientele.

Stout, whose company is partnering with the airport to maintain the area, brought along Stryker, the Coastal Pet family dog, to inspect it.  And now, add pets to that list.

Based on Stryker’s interest in the miniature fire hydrant in the relief room, the airport passed with flying colors.

It may be little in the scheme of airport design, but the pet relief area serves a big and growing sector of the airline business.

In 2017, the number of emotional support animals flying on U.S. planes climbed 60%, according to Airlines for America, a trade association for North American airlines. At the same time, human passenger growth rose just 3.1 percent.

That trend continued in 2018, with support animal traffic up 14.3 percent for the industry while passenger growth ticked up 4.7 percent.

Emotional support animals provide comfort to help relieve a symptom or effect of a person’s disability. Any animal or breed of animal can qualify as a support animal and they are not trained to perform a specific task like a service animal, according to the U.S. Service Animals website.

“Pet relief areas are becoming more and more the norm,” he said. “We wanted to provide an area for our four-legged friends.”

Stout said the partnership between Coastal Pets and the airport makes sense and demonstrates how important pets are to their owners.

“It really [shows] the significance that pets have in our lives,” she said. “They’re part of our family.”

Coastal Pets employs about 500 at its Alliance headquarters, manufacturing a variety of pet products, she said. Those products include carriers for the travelling pet who likes to fly — preferably out of Akron-Canton Airport.