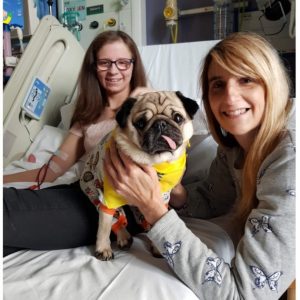 Pets bring so much joy to our lives – coming home and seeing their little furry faces light up is one of the best things, speaking as a true animal lover; and I’m not alone in my beliefs as it’s estimated 44% of households have pets. Though we all think our pets are special, and rightly so, some animals just have that extra special something – and one of those is Alfie the Pug. For those not in the know, Alfie is an adorable six-year-old pug who spends his days (pre-Covid) cuddling, soothing, bringing joy and generally cheering up the poorly children at the Royal Manchester Children’s Hospital. The adorable pup belongs to Suzy Emsden, who introduced herself to me as Alfie’s human, chef, and chauffeur and who tells me the story of how she came to get Alfie. ‘My daughter was very ill at the time and we were always at home. She was obsessed with getting a pug. She’d grown up with black Labradors and I was adamant we weren’t getting one. We see how that turned out!’ Suzy laughs. ‘We found a lovely family who had a litter of pups and we went to see them. When Alfie saw us, he ran up to my daughter, curled up in a ball on her lap and promptly fell asleep – and that was that.’ It wasn’t long before Suzy began to notice that Alfie had a very calm demeanour and an intuitive sense of empathy that was perfect for a therapy pet. ‘We saw quite early on that Alfie had a sense on whether people wanted to be bothered or whether they needed somebody lying next to them. We saw the difference he could make with one person, so we thought it would be a shame not to share it.’

After meeting Doug the pug, another famous therapy dog, Suzy learned about the charity, Pets As Therapy. Pets As Therapy is a national charity that focuses on enhancing health and wellbeing in the community through the visits of trusted volunteers and their well-behaved animals to hospitals, hospices, nursing and care homes. They have also launched a literacy scheme, Read2Dogs, helping improve reading skills in children by developing their confidence, interest and enjoyment in reading. To be a part of this organisation, pets have to be put through a series of tests. ‘They have to be friendly but not too friendly, so they can’t jump up,’ Suzy explains. ‘We had to untrain him to high five because they aren’t allowed to lift their paws in case they catch something or scratch an elderly person. They can’t be startled by any loud noises. We met our assessor, he brought out a frying pan, which I had no idea what for, and half way through his visit he dropped it on the floor to see Alfie’s reaction. He just looked at me and blinked like nothing had happened.’

Since passing his test, Alfie has gone on to support children at Royal Manchester Children’s Hospital, where owner Suzy is a consultant with the North West & North Wales Paediatric Transport Service, so the pair are a match made in heaven when it comes to dealing with the sometimes harrowing cases they see. ‘I’m used to seeing young kiddies wired up and it doesn’t faze me, which is why it doesn’t faze Alfie. I think to be in this sort of career, you have to be wired differently.

‘I have the experience of being the person that goes to retrieve a critically ill child and bring them into intensive care and normally that’s my job done. But sometimes, with visits from Alfie, we get to see the journey from admission to discharge and it’s lovely. It’s nice to see the bigger picture. I think we all join Pets As Therapy for different reasons, but we all stay for the same.’ Seeing the difference in children when Alfie visits is often beyond description, the calm and comfort he brings is something quite magical. ‘I remember a little girl who we saw in the trauma unit in orthopaedics, and they were saying how she wouldn’t speak, but she can still understand and she was painting and wanted Alfie there. I got him into his apron and the next thing you know, this little girl is chatting away to Alfie telling him how to mix paints. It was very bizarre and those are the moments you can’t define. If that dog hadn’t been there at that time, then it wouldn’t have happened. It’s a little tiny bit of magic.’

With Covid restrictions back in full force, Alfie hasn’t been able to visit children recently, but is doing his best to bring a little bit of joy through his Instagram feed. The loveable pug has a huge 128,000 followers and viewers are treated to a feed of the pup dressed in adorable outfits and videos explaining various things, such as going back to school and why people are wearing protective gear – perfect for the little ones.

Stories of Alfie’s incredible work reached the animal lovers of Tache, the eco-friendly card company, who have designed Alfie his very own greeting cards. ‘I like to pretend I was calm and collected when I was approached and saw the final design, but in reality I was screaming and dancing around the kitchen,’ Suzy laughs. ‘The team were lovely to work with and the cards look amazing.’ All of the profits from Alfie’s card sales will be split 50/50 between Pets as Therapy and Royal Manchester Children’s Hospital Charity.

When Alfie’s not working, he spends his downtime being a proper dog, which involves zoomies (dog owners will understand) and walks with his best friend, Barney the Golden Labrador. ‘He’s such a good boy and I’m proud of everything he’s done and happy people get to see it,’ Suzy says.

I’m happy I get to see it too, and have joyfully joined Alfie’s other 128,000 Insta followers, looking forward to the day when he is once again allowed to spread his magic at RMCH. About Pets As Therapy. Pets As Therapy is a national charity that was founded in 1983 by Lesley Scott-Ordish. Matthew Robinson, National Volunteer & Events Manager at Pets As Therapy, says: ‘The work Alfie and Suzy do is invaluable. Pets As Therapy work hard to improve health and wellbeing in the community through the visits of people and dogs like Suzy and Alfie. We organise a visiting service in hospitals, hospices, nursing and care homes, special needs schools and a variety of other venues all across the UK, and all donations go toward ensuring our service reaches as many people as possible.’ Any breed of cat or dog can become part of a Pets As Therapy team, but they must have been with their owner for at least six months, be over nine months of age and be able to pass the temperament assessment. Pets As Therapy also offer a Read2Dogs scheme which encourages positive social behaviours, enhances self-esteem and motivates speech in children when it comes to reading.