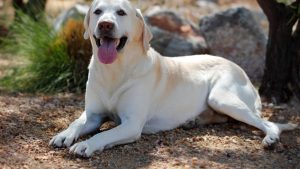 Early Times, an All-American Whisky since 1860, searched the country to find ‘All-American Dogs’ and came up with 10 winners, and one was a dog from Henderson.

Arthur, a 7-year-old yellow Labrador Retriever, was chosen from tens-of-thousands of entries as part of the “Early Times All-American Dogs” national social media campaign. Arthur participated in a photoshoot with other All-American dogs from across the country, and his picture will be featured in the Early Times 2021 All-American Dogs calendar, which comes out later this fall.

On Monday, Aug. 3, a billboard featuring Arthur was also revealed in Las Vegas on I-15 near Wigwam Avenue.

“Arthur’s passion for helping others and his gentle, kind soul makes him a perfect ‘Early Times All-American Dog,’” said Robert Trinkle, Partner and Senior Vice President, PriceWeber. “When he’s not working his tail off as a certified therapy dog, Arthur loves watching baseball with his dad, swimming at pool parties, and eating tasty food at barbeques.”

“Arthur is very calm with everyone, especially my father, who suffered from Parkinson’s disease and dementia,” said Ann Payton, Arthur’s owner. “Every morning, he’d bring my father the newspaper, and they would share a waffle. As my father’s health worsened, he became depressed, but when he saw Arthur, his face would light up. Even the night my father passed away, Arthur would not move or leave his side.”

The calendar will soon be available to the public in a downloadable and printable version on the Early Times website.

The calendar will also feature Molly, the one-year-old rescue dog sponsored by Early Times. Molly is training to become a service canine as part of the brand’s longtime partnership with “K9s For Warriors,” a nonprofit organization committed to training service canines for military veterans suffering from post-traumatic stress disorder (PTSD), traumatic brain injury, and other trauma resulting from post-9/11 military service.