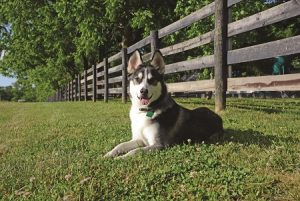 Early Times, an All-American Whisky since 1860, searched the country to find “All-American Dogs” and has selected a Simpsonville, Kentucky dog as one of the 10 winners in a national contest.

Thor, a two-year-old husky, was chosen from tens-of-thousands of entries as part of the Early Times All-American Dogs social media campaign.

Thor participated in a photoshoot with other All-American dogs from across the country, and his picture will be featured in the Early Times 2021 All-American Dogs calendar later this fall.

On Monday, Aug. 3, a billboard featuring Thor was also revealed in Louisville on I-64 near Payne Street.

“Thor has been good to the bone since he was born,” said Robert Trinkle, partner and senior vice president at PriceWeber. “After being saved from a kill shelter, Thor was adopted by the program, Paws Behind Bars, where he was trained by a prisoner for four months to learn manners and commands. He’s a smart and compassionate All-American Dog.”

“The most All-American quality about Thor is his relationship with my grandkids,” said Cassie O’Brien, Thor’s owner. “When we adopted Thor, the bond was instantaneous. He’s a great dog.”

The Early Times 2021 All-American Dogs calendar includes stories of redemption, lifesaving-heroics, military training and unwavering companionship, and will be available to the public in a downloadable and printable version on the Early Times website.

Molly is training to become a service canine as part of the brand’s longtime partnership with K9s For Warriors, a nonprofit organization committed to training service canines for military veterans suffering from post-traumatic stress disorder (PTSD), traumatic brain injury, and other trauma resulting from post-9/11 military service. To date, Early Times has donated $200,000 to K9s For Warriors.