Animal Get On Zoom Video Calls 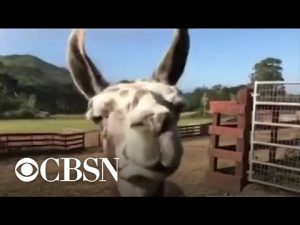 Video calls are bringing families and friends together during the pandemic. Some are also taking people for a walk on the wild side with animal cameos.

Through a non-profit animal sanctuary in Northern California, people across the world have been using Zoom to visit llamas, goats, sheep and cows. Nate Salpeter, a co-founder of Sweet Farm, says demand is so high, they’ve booked more than 600 appointments for their “Goat-2-Meeting” program and more than three thousand cameos across their network of affiliate sanctuaries. Sessions start at a $65 donation for a happy hour appearance and go all the way up to $750 for a VIP virtual private tour.

Clients have mainly been a mix of corporate meetings and small groups of friends, but the animals, including a llama named Paco, have also appeared in Zoom weddings. Salpeter says those calls offset the costs for them to offer the visits for free to public educators and their students.

“It’s a way to break from the norm–the new norm, I should say, and get outside even through a video screen,” Salpeter says. “It’s a very uplifting opportunity for folks.”

The virtual visits can offer much-needed relief. In San Diego, the handler of a certified therapy dog is now offering free sessions to help with stress relief. Judy Fridono was inspired by their work with veterans with PTSD to focus on healthcare workers but says time with Ricochet, a 12-year-old golden retriever, is available for whoever needs it.

“If you hold back your anger, that just ends up festering, so if you can tell Ricochet what you’re angry about, it doesn’t affect anybody,” Fridono says.

Fridono asks people to write a letter to Ricochet beforehand to read out loud.

“[The stress] releases from their brain and their mind when they’re writing a letter, and then when they’re reading the letter, they get the responses from Ricochet, whether it’s in a flickering of the eyes or whatever it is that she does, and it’s validation,” she says. “So it’s just a really healing kind of exercise, and it’s very personal, and it’s between the person and Ricochet.”

Diana Moczygemba spent an hour talking with Ricochet. The San Antonio nurse has been working with critically ill coronavirus patients.

“I feel good having let it out,” she says. “Having had someone to listen without judgment, that was hugely important.”