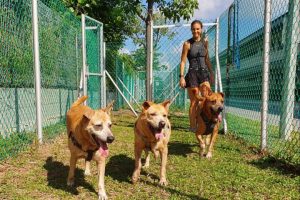 The Pandemic is taking a toll on the operations of animal welfare groups in Singapore as donations drop and fewer volunteers allowed on premises.

Social distancing measures and circuit breaker regulations have prevented groups from holding regular fundraisers and limited the number of volunteers who can care for the animals under their charge.

Ms Jessica Kwok, Group Director for Community Animal Management in the Animal and Veterinary Service (AVS) under the National Parks Board (NParks), told The Straits Times that a video conference would be held between the groups and the Ministry of National Development and NParks on Friday (May 8) to discuss the situation.

She noted that as part of the Resilience Budget announced on March 26, animal welfare groups at The Animal Lodge received two months rental waiver.

The Animal Lodge is a purpose-built facility in Sungei Tengah. More than 20 animal shelters moved to the facility from Pasir Ris Farmway in 2018.

“We are continuing to work on more infrastructural improvements and these will be shared when ready,” said Ms Kwok.

Ms Mary Soo, 72, founder of Oasis Second Chance Animal Shelter (Oscas), said the rental waiver for April and May, helped her save on the monthly rental cost of $7,000 for Oscas’ five units in Sungei Tengah.

“Finance is a big problem,” she told The Straits Times. “For us, we tend to have many handicapped and senior dogs, so a lot of our money is spent on medical or vet bills.”

Donations to Oscas have dropped substantially. Big donors have disappeared as they were also facing problems, with businesses shutting down due to the poor economy, said Ms Soo.

Oscas’ sponsorship programme, in which people pay a minimum of $50 to fund a dog’s upkeep, has also seen fewer new sign-ups. The programme typically brings in between $3,000 and $4,000 a month for the group.

Action for Singapore Dogs (ASD) president Ricky Yeo, 52, said that his group used to hold one or two events a month to generate publicity and collect donations. However, all outdoor events are currently suspended, and ASD has lost around $6,000 in donations.

His group has now tied up with local brewery RedDot Brewhouse to raise funds. “Pictures of the dogs that are up for adoption are printed on their beer labels, and we get a percentage of the proceeds. The first run of the campaign which kicked off in late-February was sold out, and they are doing a second one.”

Mr Derrick Tan, 39, founder of Voices For Animals (VFA), said that its donations too have dipped. The group usually raised funds mainly through adoption fees during adoption drives. The last one was held in December.

“Each adoption fee is $250 and during a good drive we can see between 15 to 20 dogs adopted. During the adoption drives, we also sell things like cookies and drinks. So it’s these small things that add up,” said Mr Tan.

AVS under NParks has also been helping the groups with adoption efforts.

“As animal shelters have limited capacities, cessation of adoption and rehoming efforts hinder their ability to take in more rescued animals and could cause overcrowding. Long-term housing of an animal in a shelter environment is also detrimental to the animal’s health and welfare,” said Ms Kwok.

She said NParks has made arrangements to let the groups carry out rehoming, adoption or fostering of their animals remotely during this period with no physical interaction, such as through video calls. Once the adoption or fostering has been agreed upon, the animals are transported using an approved pet transporter or by the animal welfare group itself, with safe distancing measures observed.

But some, like Ms Soo, believe online adoption is not practical.

She said: “We want people to meet the dogs and choose the dogs and ensure they are a good match. Can’t be that they just choose online, then we arrange for the dog to be sent over. We have to properly check the house to ensure it is suitable, such as if it’s dog-proof.”

Ms Soo has also spoken of the lack of manpower, noting that she usually had about 50 volunteers. During the circuit breaker period, however, only 11 are registered and allowed to enter the premises for tasks such as exercising the dogs, cleaning the kennels or sending them to the vet.

The restriction on the number of manpower allowed on site is a problem for Mr Yeo as he now has to stagger the times ASD’s seven registered volunteers can go down to the shelter.

“We understand it is necessary and we need to be on board with everyone else for this period, that’s why painful and challenging as it is, we are still complying,” he said.