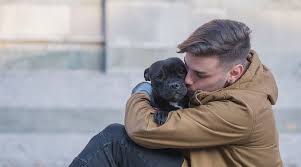 Back in 2018, Helen Brooks at the University of Manchester conducted a review of studies examining the impact of keeping pets on people’s abilities to manage mental health conditions, and Katie Haylor spoke to her about it.

Helen – So I think as a pet owner myself, I can obviously appreciate the value that my dogs have in terms of my mental health. Getting me out, connecting with nature. But I was really surprised by the range and the depth of connection that people talked about with animals. And the range of different ways that they were helping people to manage their mental health conditions, in particular around how important pets were in terms of distracting them from symptoms. So things like hearing voices, feeling depressed.

We wanted to systematically look at the research that had been published, that looked at the role of companion animals for people with a diagnosed mental health problem. So we searched in a systematic way, all the databases, also unpublished literature. So we could bring this evidence together and really see what we knew about the topic.

Katie – I’m assuming that having a pet is a good idea if you’re managing a mental health condition, is that what you found?

Helen – It’s quite a complicated relationship. And I think that speaks to the mixed results that we found when we did this review. And there’s a number of factors which impact on the relationship between having a pet and mental health outcomes. So things like the type of pet, the number of pets that a person has, and interestingly how friendly the animal is perceived to be by others. So we managed to identify 17 studies from all across the world that had looked at this topic. And in 15 of those 17 articles, there were positive aspects of pet ownership for people with a diagnosed mental health condition. Nine out of the 17 studies also identified negative aspects and there was a number that identified no relationships between the two.

Katie – Does it depend on the type of mental health condition? Because if you’re really anxious, I guess you could be anxious about your pet’s welfare, but also a pet could have a calming effect.

Helen – The review didn’t look particularly at different types of mental health conditions. What was most important, I think, was whether the person had the capacity and capabilities to be able to manage and look after a pet in terms of feeding, grooming, exercising, cost as well. So where the person was able to successfully care for an animal, then they really felt strongly that they had a positive impact in terms of managing their mental health.

Katie – Does it break down by animal?

Helen – So no, generally speaking, the research tended to include pets as one whole category. Interestingly, what you can find is that for dog owners, that’s particularly important in terms of encouraging exercise. And there was a weak trend towards pets being important in terms of helping people manage the experience of being diagnosed with a health condition.

Katie – I guess with a dog, you have to walk a dog, right? So you have to get out and I can see how the necessity of physical exercise might be good for your mental health. But if you’ve got cats or an animal that generally doesn’t like to be walked, are you still getting a benefit?

Helen – Yeah, there was actually a lot of benefit. So in terms of emotional support, having a companion animal was really important. So just having someone around that was a consistent presence. That being available to you without having to ask for it was really important. And that was true of all different types of animals included in the review.

Katie – And we’re not just talking about fluffy things that might like to sit on your lap.

Helen – There was a real wide range of animals included in the papers that we looked at. Generally speaking, they were mostly cats and dogs, but there were some things like bearded dragons. And what was really important was that people were able to select an animal that really fitted with their lifestyle and their ability to manage with a pet.

Katie – What do you make of this then? Would it be too extreme to say pets should kind of, be on prescription, as it were?

Katie – What do you think people should take away from this?

Helen – Whilst taking the caveats and some inadequacies of the data into account, I think the review really showed how important pets were to people with a mental health problem. And I think the key thing for me was about making sure that people in health services understood and recognised this. Because we know how distressing it can be when people are separated from their pets, when they have to go into the hospital or when they’re acutely unwell. So I think it’s about making sure the importance of people’s relationships with their pets is really taken into account within health services.

Katie – It’s really interesting you mentioned that, although the bias is in favour of it being good for managing a mental health condition, there were some people who experienced negative consequences.

Helen – Yeah. So I think it’s really important to say that the people that we spoke to, the people that were included in the qualitative work that was in this review, were successfully managing owning a pet. And the people, I guess, who have recently given up a pet weren’t really included in the papers that we looked at. So even the ones that were successfully managing the work of owning a pet talked about negative aspects such as cost, the emotional burden of looking after an animal when you’re feeling unable to look after yourself in some cases, was difficult. There was also – which I wasn’t expecting – a real concern about a future loss of a pet. So often people rely very heavily on this relationship with their animal in terms of managing their mental health. And they were really concerned about what would happen in the future, should the pet die or be taken away from them. But we should also say that, when taken altogether, the negative aspects were outweighed by the positive aspects that people reported in these interviews.