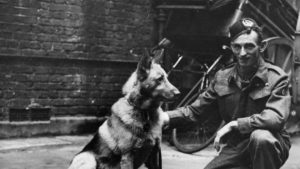 The Lady Haig Poppy Factory in Edinburgh has been making the wreaths since its ex-servicemen finished four million red poppies for this year’s remembrance events during lockdown.

Horses and dogs were used during World War One and World War Two.

Animals are still involved in conflicts across the world.

Factory manager Major Charlie Pelling said: “From leading the cavalry charge into battle; pulling heavy artillery and supplies to the front lines; travelling over mud-drenched landscapes destroyed by constant bombardment; coming under attack from killer hawks whilst delivering intelligence information to being tasked with the killing of rats and mice in the filthy flooded trenches, animals have been used in war.

“They have been forced to check for poisonous gases, have been taken from the familiarity of being a much-loved family pet and been forced into service.”

Major Pelling said these animals had also suffered from cold, fatigue, infection, bullet wounds and shell-shock and many had suffered premature deaths because of rationing and restrictions imposed on families in wartime.

“They have also been put to work amidst the screaming air-raid sirens to search for signs of life and bodies at the risk of being buried alive,” he said.

“They have been transported to the most unpleasant and obscure surroundings to provide comfort as a pet to armed forces amidst the bloody and brutal horror of war and have been thrown from an aircraft in terror to land in a battlefield only to then have to guard against the enemy and walk amongst the minefields.

“The role of animals in service can never be underestimated.”

Major Pelling added that the animals and their handlers forged strong bonds of loyalty and trust that were tested to their ultimate limits.

In 1942, in response to a government call for dogs to help with the war effort, the Railton family from Tolworth in Surrey handed over their German Shepherd for service.

He was accepted into the War Dog Training School and known as War Dog 147.

A dog with “a remarkable level of skill and intelligence”, he joined the 6th Battalion Cameronians (Scottish Rifles) and was teamed up with his handler Lance Corporal James (Jimmy) Muldoon, from Strathaven in Lanark.

He was named Khan after the Indian soldiers serving alongside the British.

During a night-time landing on Walcheren Island in Belgium their landing craft was attacked by heavy artillery on their way to the shore.

Both Jimmy and Khan were thrown into the water and as Khan swam ashore, Jimmy, unable to swim, was floundering and struggling in the water with the weight of his heavy pack.

Khan went back for him amid the continued artillery attack before dragging him to shore by his collar.

It was witnessed by other soldiers who insisted “the heroic act that saved Lance Corporal Muldoon’s life” should be recognised.

Khan was promoted to “Rifleman Khan” and on 27 March 1945 he was awarded the PDSA Dickin Medal in an honorary parade before the battalion commander.

After the battalion was demobilised, Jimmy went home to Strathaven and Khan was returned to the Railton family in Surrey.

In 1947, Barry Railton wrote to Jimmy and asked if he would attend The National Dog Tournament to parade Khan alongside other dogs who had also been awarded the PDSA Dickin Medal.

On seeing Khan reunited with Jimmy after two years, Barry made the decision that Khan should live out his days with him in Scotland.

Major Pelling said: “The intelligence of the smallest animals to the largest imaginable and their ability to work as part of a team, to risk life over loyalty and assert diligence over fear knows no bounds.

“In modern-day conflict the role of animals serving in our armed forces is as crucial now as it has ever been – especially dogs in their ability to detect bombs, weapons and drugs provide frontline assistance and protection to our armed forces.”