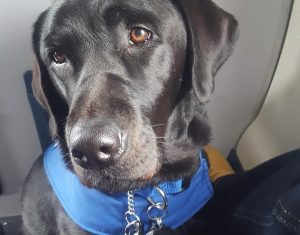 She doesn’t catch criminals, but she does help their victims. Meet Apple, the facility comfort dog, who recently joined the Montrose Police Department to calm victims, officers, and City of Montrose staffers.

“What a facility dog will do is create a calming environment, kind of reduce anxiety of victims and make it easier for them to tell their story,” said MPD victim advocate Chantelle Bainbridge, who trained with the black Labrador retriever at Canine Companions for Independence in San Diego, Calif., and brought her home in February.

“Many people in our community respond better, sometimes, to animals, in particular, dogs.”

Although the COVID-19 pandemic has curtailed some of Apple’s availability for outreach, she has already gone to work.

Hall pointed to a past call involving a young child who had witnessed domestic violence.

“The amount of comfort that Apple provided this little boy on two occasions was tremendous. We actually received compliments from the little boy’s family about how important Apple was in calming his fear, giving him someone to stand next to,” Hall said.

Bainbridge has used Apple to help with about five child victims so far, with good results.

“The younger kiddos, they really like her,” she said.

Apple can soothe people who are traumatized by crime and also help out within the police department as a morale booster, or even for an officer who may be receiving peer support services.

What Apple does not do is the work of a police K-9. Those dogs are trained to perform such tasks as searching for suspects or lost people; to detect narcotics, or to take down suspects (bite dogs) when necessary. The Montrose County Sheriff’s Office has two police K-9s; MPD has none.

Nor is Apple an “emotional support animal” as the term is commonly understood. She instead helps reduce stress and anxiety associated with officers’ and civilian support staff members’ jobs, as well as comforts victims, Bainbridge said.

Just having Apple around helps with morale at the police department, said Bainbridge, who added the dog does not interfere with productivity.

Hall said that he hopes to one day see Apple admitted to court proceedings to help comfort witnesses, as has been done elsewhere.

“It’s just kind of cool, because we have a dog around the police department now, and it’s great to just be able to take a moment to pet Apple. She’s just a really cool dog,” he said.

Bainbridge, who is also Apple’s handler, became interested in a facility dog after attending a victim services meeting, where some fellow attendees had access to facility dogs. Separately, an MPD officer who had been involved in a shooting learned about the positive effect such animals can have on officers with experiences similar to his.

“He did mention to me about the benefits,” Bainbridge said. “I approached Blaine and told him what the officer had said, that there were a couple of advocates on the Front Range that had dogs. That’s how the ball got rolling.”

But it wasn’t a simple matter of making a call to someone with just any dog.

Bainbridge began researching other organizations that had facility dogs and the organizations that provide them. Some were closer than CCI, but too pricey. Others required two handlers. Canine Companions for Independence only needed one handler — and the nonprofit is able to donate the dogs to those who clear its selection process.

“It’s quite a process, actually, to receive one of these dogs,” Hall said. “We weren’t 100% sure we would be selected to receive one when we applied, but we were fortunate to.”

In February, Bainbridge attended a two-week training in San Diego, during which CCI’s trainers fully assessed how their dogs interacted with applicants, and weighed which dog was best suited to which person, and which purpose. Apple and Bainbridge graduated the program on Valentine’s Day, and the Lab headed back to Montrose with her.

Bainbridge’s only expenses were travel and food; there was no fee for Apple herself and Bainbridge was able to stay for free in a CCI dorm. The two must return yearly to re-certify.