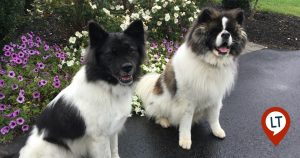 LebTown is featuring a different Lebanon County pet each Friday to help us enter the weekend with the best vibes possible.

This week’s pets are Barkley and Bella, the fur kids of Todd and Diane Dellinger.

Barkley and Bella are both longcoat American Akita’s. “They love to hike and meet new people,” said Diane in the nomination email to LebTown. “They love to travel and have been to New Orleans, Nashville, Buffalo, Canada and many other places.”

Barkley and Bella draw a crowd wherever they go, but these pups are up for the publicity. Barkley and Diane are a therapy dog team with Keystone Pet Enhanced Therapy Services, more commonly known as KPets. “Barkley has met thousands of people in his life,” said Diane. “He does visits at colleges and high schools as well as many other places. He also does visits with clients at SARCC in Lebanon.”

Bella is a rescue from Southern Akita Rescue Alliance. “She was found as a stray in Memphis Tennessee,” said Diane. “She had a rough beginning in life, but is now very spoiled.”