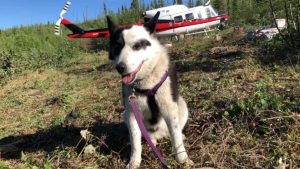 The Isom Creek Fire is burning along the Dalton Highway near the Yukon River Bridge. One of the challenges of fighting the fire has been bear sightings. The nuisance bears will get into the firefighters’ camps, damaging supplies and potentially endangering people.

The problem is not new. “Often times when we are on an incident for days, and days, eventually the bears get braver and braver and want to come in and eat the tortillas or the butter or the bread or something,” said Mike Bradley, a fire safety officer for the Isom Creek Fire.

In previous years the fire service had to kill bears that were being a nuisance. They have now been trying to find non-lethal means to deal with problem bears.

Bradley said that he heard about bear dogs in a news article and started researching if they could be used for fires in Alaska. He ended up finding two certified dogs in Fairbanks and was able to use them on the Isom Creek Fire.

The dogs can smell bears from a moving vehicle and are able to deter any bears from coming into camp. Bradley said that wherever the dogs have been on the fire, firefighters haven’t had problem with bears.

He said having the dogs on the fire helps in others ways as well. “I think they have helped just the firefighters in a stressful environment. A dog just seems to break down barriers when people are away from home, or not there for fathers day, and it just seems to warm everyone’s heart to have a dog in camp. Dogs have been camping with humans since the dawn of time and it just seems natural to have dogs in camp.”

We will be following up on this story once the dogs return from working on the fire next week.