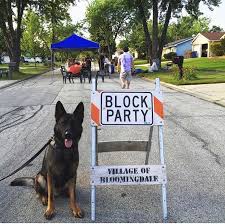 The Bloomingdale Police Department lost one of its own this week, a four-legged warrior named Kane.

Kane, the department’s service dog, died in his sleep Tuesday at the age of 6 from unknown causes. His time as a member of the force left a remarkable impression on his handler, who said the German shepherd will be sorely missed.

Officer Levi McGhee, Kane’s handler, saw Kane as more than just a service dog but also as a genuine pet and loving member of his family.

“I feel like I’ve lost my shadow,” McGhee said Thursday. “He wasn’t just a pet, he was literally a part of me and a part of our family. His unexpected passing has been extremely tough on all of us.”

Kane began his training when he was 1 year old, the typical age dogs become trained to become service dogs.

When he was not playing around like a normal dog, he was chasing down violent offenders and sniffing out drugs and illegal narcotics, often protecting the lives of other officers in the process, McGhee said. One case that sticks out to McGhee that exemplified his service was tracking down a DUI and car theft suspect hiding under a car last December.

Frank Giammarese, director of public safety, said he plans to add another service dog to the department, though there is no timetable for when that will happen.

“It’s been a great program to train these dogs, but it’s still a tragic loss,” Giammarese said. “That dog had a bigger fan base than anyone in the community. I don’t know if you can replace Kane.”

There will be a ceremony and procession in his honor at 9 a.m. June 7 at Scottish Rite Valley, 383 E. Lake St., Bloomingdale.