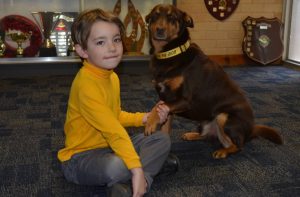 Young Public School added a new addition to its classrooms last term, but it’s only now that school has returned that students are truly able to see the benefits of their new classmate.

Bob the Australian Kelpie is the latest addition to Young Public School’s staff and he has been welcomed with lots of pats and cuddles by both students, staff and parents alike.

The three-year-old former working dog is now a therapy animal who was brought in to help children in a calm, active but therapeutic way.

As an added bonus it’s not just the students who have been benefiting from Bob’s companionship, but the teachers and staff as well, and the timing of Bob’s arrival couldn’t have come at a better time with the new addition last term just as COVID-19 started to take hold.

“It’s been a very difficult time so far this year with COVID-19, thankfully Bob has been here to help the children cope with everything that has gone on, he is just a joy to have here,” Young Public School principal Edwina Wymer said.

“The children love to read to him, they take him for walks and he has also visited several classrooms.

“He’s a very sweet boy who has not only benefited the students, but the staff as well.”

Bob is the pet of Jane Caldow (School Administrative Manager) who would sometimes bring him into school during pupil free days.

“He would come in and sit by my desk during student free days and Mrs Wymer would comment on the calming effect he had and say that we really should get a dog for the school,” Mrs Caldow said.

When the wheels were in motion Mrs Caldow had to have Bob assessed by Debra Coleman, in Orange.

It was no surprise to Mrs Caldow or Mrs Wymer that Bob passed his assessment with flying colours and became a certified therapy dog.

“It’s been a learning curve,” Mrs Caldow said. “At first I thought he would be able to go all day, but I soon realised he would get tired very quickly.”

Thanks to that learning curve Bob now has half-hour breaks to nap in between mingling with students. Bob also only attends school three times a week on Monday, Wednesday and Friday.

“He needs that day in between to rest,” Mrs Caldow said.

When Bob is at home he likes to go for a daily run and relax according to Mrs Caldow, he also visits her daughter and son in law’s farm where he runs around with their dog, and around five times a year works with the sheep.

Bob not only provides emotional support to students, he is also helping them to regulate their emotions, developing social skills and responsibility as well as many other skills that are so important to the growth and development of children.