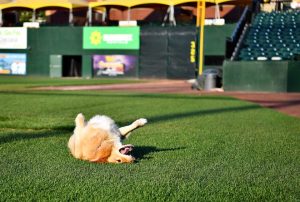 “You can’t put into words what Boomer meant to all us at the Revolution, and the fans he made smile each time he visited,” said general manager John Gibson in a news release. “He was one of a kind, and we were lucky to have him.”

Boomer came to the York Revolution through the SPCA of York County and traveled with the team. During his term as mascot, Boomer also earned his certification as a therapy dog.

Boomer lived with Jeff and Cindy Hoke, who gave Boomer a home when he wasn’t at the ballpark.

Boomer hung up his collar at PeoplesBank Park on Sept. 22 to pass the leash to Siberian husky Blue, who took over as the new team mascot.

As they did with Boomer, York Revolution officials contacted the York County SPCA and inquired about potential dogs to fill Boomer’s shoes. That’s how they found Blue.

“Everybody realizes that Boomer’s been doing this for almost 10 years now,” Doug Eppler, a spokesperson for the team, said when Blue became the mascot. “I think (fans) are glad to hear we’re going to find a successor who will carry on Boomer’s legacy ⁠— not every team has a furry little ambassador.”