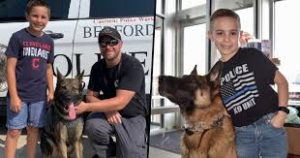 At the age of eight, Brady watched a show where he noticed that a police dog was not wearing a vest. For little Brady, that was a problem that required immediate attention. He wanted to do something to fix the problem and be fair to the service animals, reports CNN.

This crucial observation made the Ohio, United States resident start Brady’s K9 Fund, a funds raiser on GoFundMe that aimed to provide bulletproof vests for military and police dogs.

The fundraising has helped Brady supply vests to over 257 dogs across 23 states in Canada as well as in Afghanistan.

Authorities thanked Brandy saying many dog handlers have reached out to Brady through word of mouth or his website. They even said that most people don’t even realise that the K9 units in the police forces heavily depend on donations, so every dollar sort of counts.

As per the report, Brady has also collaborated with a local project where he created a park near his hometown to provide a space for handlers to train their service dogs.

A few days ago, a 1.5-year-old pet dog helped rescue workers by spotting the floating body of its owner after a landslide and unprecedented rain wreaked havoc in Idukki, Kerala.

For almost a week, Kuvi (the dog) was trying to locate the bodies of the family of four and on one morning in Pettimudy, he could finally spot Danushka’s body floating on a river, 4kms away from from the landslide spot.

Few days after, when Ajith Madhavan, Kerala Police Dog Squad trainer reached the spot with his dog squad, he met Kuvi and decided to adopt him as one of his own pets.