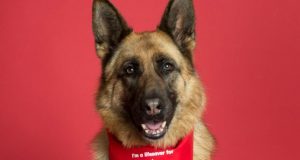 Two years later, Pet Blood Bank UK was established in Loughborough with the aim of collecting blood from canines all over the country.

It was founded by a veterinary nurse, Wendy Bennett, who previously worked with Vets Now which runs out of hours and emergency services across the UK, including Scotland.

With Vets Now lending its premises for collection sessions, the charity has grown every year since.

The only stipulations for doggy lifesavers is that they must be aged between one and eight, over 25kg and fit and healthy.

Much like the human service, dog owners kindly bring along their canine companions to give blood.

It is then transported to the processing centre in Loughborough where it is separated into red blood cells and plasma products and stored ready for dispatch.

Larger veterinary practices in Scotland will order and store stock to ensure a ready supply is quickly available to vets across the country who need it in emergencies.

Just like human blood, it does have a shelf life – six weeks for red blood cells and five years for frozen plasma.

So there is a constant need to replenish supplies. And the need has never been greater for Pet Blood Bank donations have not been immune to Covid-19, as Nicole Osborne, the charity’s marketing manager who is based in Dunfermline, explained.

“We had to stop accepting new registrations when lockdown began in March,” she said, “because things were so uncertain.

“Back then we thought it would just be temporary but, as lockdown continued, we made the decision that we needed to start accepting new registrations again. We started in June but it meant more discussion with owners.

“What we need now are dogs who are happy and confident enough to come into sessions on their own.

“Usually, owners would be able to accompany their pets for the sessions. However, as we run them in veterinary practices we have to adhere to their Covid-19 restrictions.

“That means we collect the dog from the owner in the car park and take them into sessions alone. Therefore, we need dogs just now who are confident enough to do that.”

Veteran doggy lifesavers love donating for they know how much attention and treats are lavished on them.

They also get a special “I’m a lifesaver” bandana and have their picture taken for use on social media.

“There’s usually a team of five – a vet, a veterinary nurse and three assistants.

“When dogs first come in, they get a health check from the vet to make sure they are fit and healthy.

“They are then lifted onto a table and lie on their side so we can take the donation from their jugular vein.

“We take about 450ml of blood each time, which takes about five to ten minutes during which they get lots of praise and tummy rubs.

“Once they’ve donated, they get a bowl of water and a lot of treats, as well as a goody bag with toys and treats for them to take home.

“Dogs who have donated lots of times even know what pocket we keep the treats in!

“We then take a photo of them in their lifesaver bandana to share on our Facebook page.”

Dogs will be invited to give blood between one and six times a year, depending on their blood type.

At the moment, the Pet Blood Bank needs both positive and negative donors.

Nicole added: “We hold three to four sessions every month in Scotland but owners need to register on our website or call to book in.

“We’ve not seen a huge drop off in Scotland but we need donors of both blood types to stock up the bank.

“We’re getting almost as many registrations as normal now but we’d love to welcome new lifesavers.”

Seventy per cent of dogs are positive blood types but it is, in fact, the negative blood that can be used for any animal.

So while Pet Blood Bank is keen for donations from both, it is particularly keen to recruit more negative donors.

Happily, the team have been able to identify breeds which are more likely to have negative blood.

And they are appealing for owners to consider their pet as a lifesaver.

A Fife dog, Izzy, retains the record as Scotland’s highest donating dog – despite retiring a few years ago.

A German Shepherd, she is also the highest donating negative blood type donor. She donated 29 times before retiring.

Nicole said: “Izzy was an incredible donor and we’d love to recruit more dogs just like her, who might even be able to top her record!”

The most common reason for dogs needing blood is Immune Mediated Haemolytic Anaemia (IMHA), a condition where the body attacks its own red blood cells.

A red blood cell transfusion is used to treat it. Trauma is another factor.

Nicole added: “Before Pet Blood Bank, vets had to find a donor while the animal waited for treatment. Now they have access to blood, day and night.” Since 2007, more than 11,000 dogs have registered but many have now retired. There are 4000 active donors today.