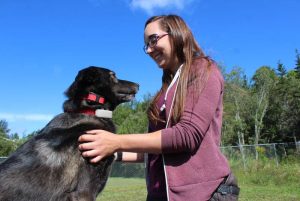 It’s nothing but wagging tails and well-mannered personality characteristics when Taylor, a rescue dog who now lives with Arielle Lewis, greets visitors to his new home. It wasn’t always that way.

Turning Taylor from a problem dog to a perfect pet was the last bit of inspiration Lewis needed before fully launching her dog walking and training service last year.

“She came here as a foster and it was going to be to practise my skills,” said Lewis, the owner of Village Dog Walking and Training in Coxheath. “This was a dog who came with some problems.”

Taylor needed structure to do well in any home after coming from a place that had none. The result was a dog that made some bad choices.

In the beginning, Lewis wasn’t sure it was safe to keep Taylor around her other dog Skittles. Working on her skillset so that she could be happy in another home was an initial goal of the training regiment.

“Once she went through the training, she now absolutely loves other dogs. She just didn’t know how to behave properly. I’ve had her for two years in August.”

The foundation of the training aspect of her new business is to help other dog owners to better enjoy their pets, as well.

“There are a lot of struggling dog owners who don’t know what they are supposed to do and don’t know how to deal with problems. It makes their life a lot smaller when they can’t take their dog and go places and enjoy their dog.”

Annezita Feldman reached out to Lewis for help with her collie-mix Colbie who just wasn’t comfortable in public spaces.

It was only after a few sessions that big changes were noticed in her pet.

Feldman is now taking care of a rescue dog named Journey and is also putting that dog through training sessions with Lewis.

Her two dogs are now inseparable and are often complimented on their behaviour when they are out in public.

“A word Arielle will use is they need to be polite and that’s what they are.”

The dog business is not the first entrepreneurial effort for Lewis who ran Game On laser tag for three years before closing it in the spring of 2018 after business slowed.

“I learned a lot from it, a lot that has helped get this going and off the ground,” Lewis said. “It just wasn’t busy enough to keep (laser tag) going and I’ve always had a love for dogs and a passion for dogs. I just didn’t always know what to do with that.”

The dog walking and training business currently has one part-time employee and Lewis is actively trying to hire another as the business continues to grow.

She also makes her own brand of dog treats she’s sold at the Cape Breton Farmers’ Market and is hoping to get into grocery chains.

“I hope to keep growing the training aspect. There’s a lot of people that need help. They just think they can get a dog and it’ll be great. Sometimes it goes well and somethings they need a little help.”