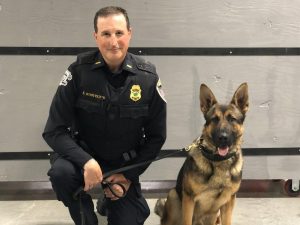 A new police dog will report for duty early this week.

Marko, an 18-month-old German shepherd partnered with Lt. Sean Kostelnik, is the Valparaiso Police Department’s sixth canine and the only one certified in explosive detection as well as full patrol capabilities.

Marko and Kostelnik could help other jurisdictions as well if their expertise is needed and they can respond in a timely manner, said Sgt. Joe Hall, the department’s commander of support services.

“Our canine teams are required to train at least 16 hours per month,” Hall said. The dogs and handlers all spend one day a month working together for training.

The dogs are also trained to be “social partners” for the community, interacting with members of the general public, Hall said.

“Our community is very involved with our dog program,” Hall said.

Kostelnik, a 24-year veteran of the department, has worked his entire career in patrol. His last canine partner, Cora, retired in 2005.

A dog’s service life varies according to its age and health, but a police dog’s career is estimated at six to 10 years, Hall said.

Valparaiso Events contributed to the funding needed for Marko. The city’s police dogs and their handlers are often seen at community events throughout the city.