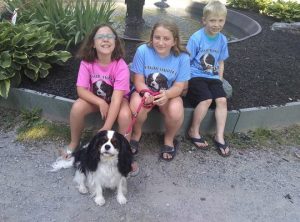 Not even halfway through his first term as mayor of this small Vermont town, three-year-old Murfee is lapping up his only official duty: to charm.

Specifically, the King Charles Cavalier Spaniel, a certified therapy dog, is charged with prompting admirers to donate toward a $70,000 playground rehabilitation at Fair Haven Park.

By mayoral request, Barker has dusted off her old sewing machine to crank out and sell hundreds of canine-themed, pandemic-appropriate face masks for the cause.

“Murfee has learned to delegate,” observed Barker: The canine’s job apparently ends after he has drawn and entertained a crowd.

But his administration’s efforts to secure funds for the playground has been challenged by limits on large social events — the Spring Fling, the concerts in the park and so on.

Murfee has relied on sheer charisma, as well as the low likelihood he will either contract or transmit COVID-19.

“He’s allowed to love on the kids and to let them love on him,” Barker said. “Kids are his thing. He’s a goodwill ambassador for the town.”

“He’s enjoying the attention, but I’m getting a little burned out,” she confided.

Rumors have surfaced of even more contenders poised to declare candidacy in 2021.

“I’d be a little upset if we had a hamster win next year,” Barker said. “We need a dog mayor.”