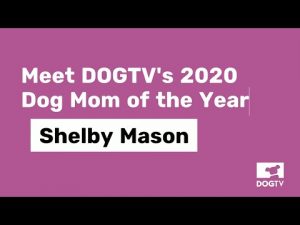 Shelby Mason beat out over 100 other contenders in the nationwide competition. She is an animal welfare advocate and pet parent to both a pomchi and a senior mastiff.

When Shelby Mason found herself chasing a runaway dog through the streets of Hilliard last summer, she had an epiphany.

“That’s when I realized I’m a crazy dog lady,” said Mason, 27, of Westerville, who was visiting her parents when she saw the dog bolt down the street.

She learned that the Great Dane belonged to a 12-year-old in the neighborhood and took it upon herself to help reunite them.

Because of her commitment to dogs in the community, as well as her own two pooches, Timmy and Dinky, Mason was crowned “Dog Mom of the Year” by DOGTV in May.

The television network provides relaxation, stimulation and other types of programming for dogs. For two years, it has hosted the nationwide competition, which requires that participants submit a video about their passion for dogs.

“I was so surprised because there were a lot of other people who entered,” Mason said. “I felt so honored.” DOGTV narrowed more than 100 submissions down to 10, which were then judged by a panel of industry professionals. As the winner, Mason receives a free, one-year subscription to the network and a variety of gifts from pet-based companies.

“She is an ambassador for the year,” DOGTV General Manager Beke Lubeach said. “We like to tap into her wherever possible and get her views on things and give her the opportunity to talk to our audience about some of her initiatives.”

Mason is a wellness coordinator at Bark, which provides dog products and services via offices in New York and Columbus. She also advocates for animal welfare organizations.

Earlier this year, she organized a pup kissing booth, which benefited Grateful Acres Pet Sanctuary and Adoptions, and Speak for the Unspoken, a pet rescue for animals with special needs.

“The more experiences humans have with their pets bonding, the less likely they are to surrender them,” she said. “So I’ve been really passionate about creating these really fun ways for our employees and people in the community to bond with their dogs.”

Mason has been fostering dogs since she was 7.

“My mom would just bring dogs in the house and tell my dad, ‘Hey, we have a new dog today,’” Mason said.

One of those rescues was Timmy, the now-senior mastiff who joined the family when Mason was 18. But it was a bumpy transition; Timmy would run away and cry at night, Mason said.

“I didn’t like him (at first),” she admitted. “And then we spent the summer together. … We became best friends.”

After college, Mason adopted her now-4-year-old pomchi, Dinky, who is an emotional support animal.

“I got him registered right before the pandemic started,” Mason said. “It’s just been so good for my mental health.”

Mason has helped people cope with the death of their pets by starting a pup loss program at Bark. She is also pursuing a master’s degree in social work, which will help with her advocacy.

“I hope to do my internship in veterinary social work so I can keep being there for parents when they need it the most,” she said.

Mason also wants to be an example for others; she spent much of her DOGTV video encouraging other pet parents to volunteer, look for missing dogs or simply advocate for them to sit on patios in public places.