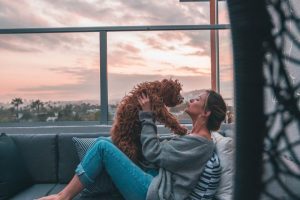 ESAs have been in the news quite a bit in recent years. Before we discuss what it’s all been about, let’s start with a definition. We’re talking about Emotional Support Animals. They are designed to help people struggling with a wide range of mental problems. It could be a man who has insomnia or an older person struggling with confidence issues. It could be a lady struggling with phobias and depression or an ex-soldier battling with PTSD.

When people have a designated ESA they no longer feel alone and not comforted at home, and are likely to sleep better as a result. Alternatively, they feel more confident when going outdoors and being around other people. The animals are usually domestic, such as cats and dogs, but can include other species too. They could be gerbils and hamsters, rodents, turtles, fish and rabbits.

In order to obtain formal documentation to show your entitlement to have an ESA, you need to consult an authorized mental health practitioner. There are many to be found online, according to the experts from Therapetic that some confidential screening tests are free. Many can be done by phone. People talk to a licensed professional and find out if they qualify for an ESA letter. If they do, it can be shipped out very quickly. You are not guaranteed one, of course, as it depends on your emotional state and whether you can build up a sufficiently good case. If you gain an ESA letter, it will be valid in all 50 states of America.

When someone has obtained legal permission to own an ESA and keeps the animal with them, there are two main times they will need to prove it: in matters related to housing and to travel. Other circumstances include visiting restaurants and hotels.

As regards housing there has been a lot of adverse publicity in the papers. Individuals with ESAs have complained they have been denied occupancy by potential landlords. The Fair Housing Act says you mustn’t be refused a tenancy on the basis of disability.

Landlords in turn have been angry. They want to look after their properties as they are their main asset. Many of them draft a no-pets policy as a result. When someone produces an ESA letter, however, they are unable to enforce that policy. The whole process related to ESAs and housing applications have been vague, so landlords have been rightly confused and frustrated.

In January 2020 The US Department Of Housing And Urban Development published new guidance advice for individuals and landlords. The latter has been banned from saying which breed of animal can or can’t be accepted or how much it must weigh.
Landlords have also been stopped from charging additional fees.

Sometimes, landlords dragged their heels on ESA tenancy applications, but now they have ten days to respond — and it has to be an active communication with the individual. Landlords were also accepting one type of letter, but not another, which caused a lot of distress for people. They now have to accept the ESA letter, no matter what format it appears in.

People with ESAs had also vocalized how they felt, being asked personal questions by potential landlords. Surely the ESA document was sufficient? Following the recent ruling, landlords are no longer allowed to probe further. These are just a few of the issues that have been in the newspapers and steered this new legislation. Another sticking point has been with transport. More and more ESAs have been traveling with passengers on airplanes and not being supervised. This has caused friction, both with other passengers and the cabin crew. Even other disabled people were complaining. The Department Of Transportation wanted to ban such animals under the health and safety umbrella. Yet again, the whole process of ESAs and transport has been vague. Travel authorities want a streamlined process for all airlines and locations. They are tired of passengers with more than two pets, or having animals that are bigger than the allocated foot space. The discussion will no doubt be ongoing, but a standard policy on pets and travel across the board will benefit everyone as it has been long overdue. It’s not just ESAs that we’re talking about here.

It is very easy to see how landlords could be frustrated with the previous procedures, and in turn, wants to accept a different tenant who does not own a pet or pets. It’s also easy to see how ESA owners felt discriminated against, and alone. The same thing goes with plane travel: It can’t be good for anyone when there’s lots of pets running around uncontrolled and uncontained. From the viewpoint of the person with emotional issues, the last thing you want are challenges when it comes to travel — you may feel anxious enough as it is being on a plane, without struggling to get a ticket or coping with your fellow passengers complaining. No doubt more legislation will be forthcoming, and both sides of the fence will have something to say. Ultimately, we want a world where people – whether fit and well or battling with mental illness — can live and travel in peace together.