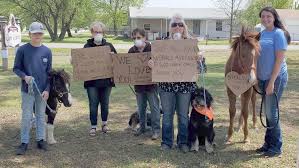 Paula Seck had an idea to cheer up folks that were confined to nursing homes or care centers over these last two months.

She loaded up the horses and “Diesel” the dog, along with volunteers who brought animals, and went about to bring joy during the COVID-19 pandemic.

“We work with an Oklahoma-owned home health and hospice,” said Seck. “During the coronavirus, we could not see our customers. We started doing pet therapy. We owned ponies and dogs.”

A lot of elderly patients had horses so Seck thought they would appreciate being around them.

The group, made up mainly of people connected with Oklahoma-owned Complete Home Health and Hospice, hit the road in Wagoner and Muskogee.

At the Wagoner Care Center: “It was a wonderful day. We did window therapy. Some opened their windows and talked to us and thanked us. That was so rewarding,” Seck said.

At Muskogee’s Pleasant Valley: “They brought residents outside and served popcorn and snow cones. The horses got to eat out of their hands and we kept six feet away for social distancing,” Seck added.

Kerissa Seck had the horses. She also joined in greeting the folks.

Others that made the trips were Kathy Gosselin, Donna Byers and Nan Perryman with her grandson.

Why did they do this?

“We love giving back to the community. It’s neighbors caring for neighbors. We wanted to be there for them,” Seck concluded.