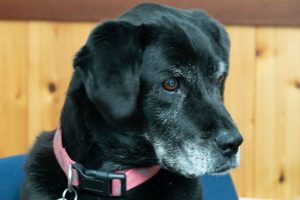 A beloved member of the U.S. Coast Guard’s St. Ignace crew has advanced in the ranks thanks to her loyalty and good work.

Onyx, a 13-year-old black Labrador retriever, received a shiny new pin — a gold anchor with a gold star — denoting her advancement to Senior Chief Petty “Pawfficer” for her service as a station mascot and morale dog.

The pin was placed on Onyx’s pink collar in an advancement ceremony on Friday, May 1. The ceremony concluded with the newly pinned officer receiving a treat.

The station’s Chief Petty Officer Tyler Benson said it had been about three years since Onyx’s most recent advancement, meaning it was time for her to once again rise in the ranks.

“We notified the headquarters in Washington, we went through the chain of command, and they said it’s well-deserved and due,” Benson said.

While she isn’t trained to perform search and rescue, the pup has long accompanied fellow crew members to events to teach people about water safety, and continues to provide comfort and companionship to the station’s crew, their families, and the community.

She is also something of a literary star, as the main character in a children’s book series, The Adventures of Onyx, written by Benson.

Since the COVID-19 pandemic stay-home orders began last month, Benson has been reading the Onyx books to children via Facebook Live, often along with Onyx herself.

It’s one of the many ways Onyx continues to excel at her “duties” of bringing joy and warmth to people as an emotional support dog.

“When the guys come back from a rescue case, she greets them at the door,” Benson said. “She’s keen at sensing when people are down or stressed, even during this COVID crisis. She’ll put her head on their lap or watch TV with them.”

While Onyx may no longer be as spry as she was during her early years at the station — her muzzle is graying, and she spends much of her days now napping comfortably on a couch — she’s still very much deserving of the honor of her new rank, Benson said.

“It’s neat to see her working through the ranks like the rest of us,” he said. “She’s slowing down now in her older age, but she’s really good at just being there for the crew.”