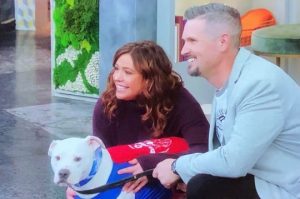 Celebrity chef Rachael Ray issued an invite to Cole the Deaf Dog suggesting he pup over to the studio and appear on her show.

Cole and his human sidekick, Chris Hannah, fired up the Colemobile. The duo headed to New York City to spread their message of acceptance, a mission they launched two years ago at Mennies Elementary School.

The show taped just before Thanksgiving, but its air date continues to get shuffled with breaking news broadcasts cutting into the daytime television viewing schedule, Hannah said.

The segment is tentatively scheduled to air at 2 p.m May 7 on WPVI Channel 6.

Hannah, a music teacher, adopted Cole from the South Jersey Regional Animal Shelter. He said he didn’t see the puppy’s deafness as a disability.

Now a certified-therapy dog, Cole is a classroom regular and motivated Hannah’s 250 students to collaborate on a writing assignment.

They transformed Cole and Hannah’s deaf nephew, Kevin Guinan, into comic book superheroes who join forces to encourage all students to be kind and accepting of others.

It’s usually Cole providing the comfort, but he got to enjoy some of his own during the two-day trip that included a swanky over-night stay in a hotel.

Before taping the show, they took a walking tour of the city and visited Macy’s, where Hannah carried Cole up the escalator.