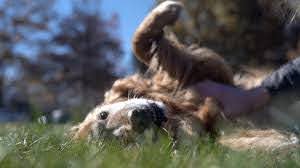 There’s a major love affair in the U.S. between humans and their furry friends. A playful puppy named Clifford has been Rachael Greenburg’s saving grace during the pandemic. She says the past nine months have brought a lot of anxiety into her life, but Clifford’s relentless support helped her through the first panic attack she ever experienced.

“He woke up, and just like kind of climbed on my lap and he tried to put my feet up. And I don’t think he knew exactly what was going on, but he just like seemed to respond to it,” Greenburg said.

Greenburg isn’t alone in her feelings.

There’s been a rise in depression and anxiety in many people’s lives since the start of the pandemic.

It’s Samara’s job as a therapy dog to offer people love and support.

“She went and met one of the students who was quarantined due to COVID-19 who was feeling a little down and lonely,” human-animal connection expert Philip Tedeschi said.

Tedeschi is a professor in the graduate school of social work at the University of Denver, and a human-animal connection expert with the dog-sitting website Rover.

“We’re looking at human-animal connection through the lens of how people and animals interact and what some of the health-promoting benefits of that are,” Tedeschi said.

According to a recent survey done by Rover, 92% of dog owners say that their dog has played a role in positively impacting their mental health since the pandemic began. Tedeschi says history proves dogs have become some our most important, reliable and trusting friends.

Tedeschi says we can measure how our interactions with companion animals influence our health. In fact, he says humans can tend to match their own breathing and heartbeat to the resting rate of an adult dog which helps us to calm down.

“They understand our language, they know the nuances of the tone of voice we use, in many cases they’ll recognize something as small as a millimeter of movement in the human face that reflects a change in our emotion,” Tedeschi said.

There’s a reason dogs are used to comfort veterans with PTSD and patients in hospitals. They offer endless love and keep us present in the moment.

“It turns out that social support doesn’t only have to be human beings that support us,” Tedeschi said. “That in many cases our non-human animal relationships are really effective support systems for us.”

It was Greenburg’s time in a hospital that inspired her to study social work and animal therapy.

“I have an auto-immune disease that I was diagnosed with at nine years old,” Greenburg said. “We had a dog named Teddy and specifically got him when I was diagnosed.”

Now she’s training Clifford to be a therapy dog. He’s brought happiness to her grandmother who lives with dementia. Greenburg says she’ll be a dog owner for life.