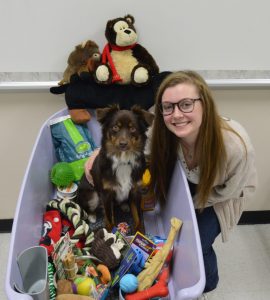 Plano East Future Farmers of America has launched a pet supply donation drive for the rescue hospital Mazie’s Mission, in hopes of helping animals affected by the COVID-19 pandemic.

Plano East Senior High School students are accepting pet supplies such as collars, crates, pet beds, leashes, toys, and towels. The items can be either new or gently used. For those who don’t have pet supplies but would like to donate money, they can do so via Amazon Wish List.

The drive will last until April.  “This project is in benefit to the Mazie’s Mission foster dogs,” Plano East high school student Jenna Moon, the FFA’s community service chair, pointed out in a Oct. 21 PSA video on Twitter. “Whether it is a dog or a cat, this project is to help provide them with materials with new fosters and new adopters and give them the materials they need to bring a new animal into their households.”

Moon kicked off the drive in August for the Girl Scouts to earn her Girl Scout Gold Award.

Caitlin Schmedthorst, an agricultural teacher and FFA advisor, told Local Profile that an important part of FFA is the community service component, and they felt that Jenna’s Girl Scouts project fit perfectly with their mission.

“Jenna took it to a whole new level because she is a superstar,” Mrs. Schmedthorst said.

Plano East FFA chapter established in March 1982, a year after the high school opened its doors and when Plano had mushroomed from a farming community of 3,000 people to a sunbelt city with more than 80,000 people in the early ‘80s.

But don’t let the FFA name fool you. They aren’t just inspiring the next generation of farmers, though raising livestock is still part of the program. They are also preparing students for the veterinary clinic, the floral world, and businesses in the agricultural sector.

“At Plano East, our goal is to educate our students on the importance of agriculture, and offer courses that will give students skills that they can use upon graduation from high school.

Plano East FFA advisor Chris Ivy said one of the big hurdles was to get information about the pet supply drive out to the public. “That is where we came up with the idea of a PSA video [to post on] Twitter and Facebook because people are more likely to watch the video,” Ivy said. “Jenna came up with a lot of that as far as the outlook and goals for the community service project.”

Jenna picked Mazie’s Mission because they have an inspiring mission and work with other rescue organizations. They also offer veterinary services.

“What is really great about this program is that they go to kill shelters and pull animals from the shelter and put them into a foster program, each animal in a home situation with a family,” Jenna said. “Being a foster parent helps the community.”

As of this writing, Plano East FFA chapter has collected more than 50 items, and people are donating daily. “It is giving a positive reflection on our chapter,” Ivy said. “It has been a good publication relations project. We have that name of helping animals.”

Plano East FFA chapter’s pet supply drive will last until December. Their goal is to collect as much as they can by the end of the year. Items can be dropped off in the purple dog bath at Plano East’s agricultural building, which is Building 3.