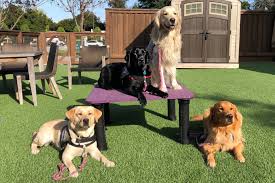 After serving in America’s armed forces, Stanford’s student-veterans shifted their focus to academia and research. But since arriving on the Farm, some have continued to heed the call to serve with help from some animal companions.

In partnership with the non-profit organization Warrior Canine Connection (WCC), student veterans volunteer to train dogs to be service companions for other veterans living with mobility or cognitive challenges. Although a stark contrast from their military service, the students say the volunteer work is incredibly fulfilling. They also hope to expand the program to include non-veterans at Stanford once the campus reopens.

Before COVID-19 forced the Stanford community to disperse, the student-veterans gathered about once a week at the Office for Military-Affiliated Communities (OMAC) to meet dogs – brought to campus by a local WCC trainer – and guide them through training activities.

“We help them practice things like staying still and calm or how to focus on one person at a time,” said Nestor Walters, a Stanford junior majoring in mathematics and a 10-year Navy veteran.

Since shelter in place orders, the veterans have kept up with training through videos and live cams shared by the WCC. In addition to teaching the dogs commands and practical skills, such as how to retrieve objects, the students also show them how to recognize signs of distress and be supportive companions to veterans with emotional or psychological trauma. The students say that training the animals is a rewarding process that’s helped them find community and purpose as they’ve transitioned from military life to academia.

Walters first met Frankie, a golden retriever, when he was just a pup, small enough to hold in his hand. At the time, Walters was recovering from knee surgery and was on crutches and painkillers, but still managed to teach Frankie simple tasks.

“We started by rewarding him every time he looked at me,” Walters said. “Since then, I’ve watched Frank – named in memory of Army Air Corps 1st Lt. Francis Misciagna – grow into a slobbering, playful, beast of a hairball.”

Walters has been training Frankie to open doors and pick up objects. He’s even taught him how to identify and disrupt body language that indicates anxiety and depression – feelings common to veterans who have experienced trauma.

“As much fun as it is to basically play with a dog and have it count as public service, it’s also a sobering reminder [that] Frankie is preparing to join a final veteran who is mobility impaired, possibly battling combat trauma or mental illness,” Walters said.

Mechanical engineering PhD candidate and Navy reservist John Alsterda met Arthur – a Labrador – at an OMAC barbeque and immediately felt a connection. Alsterda participated in weekly WCC training sessions at Stanford. He said training and working with WCC canines has been a rewarding experience that also provides some respite from the demands of being a Stanford student.

“It feels like I’m making a contribution to help train a service animal that could make a real difference in someone’s life,” Alsterda said. “As an added bonus, I get to learn about animal training and experience a joyful connection that provides a balance to schoolwork.”

Sophomore Joel Johnson is a five-year Marine Corps veteran studying symbolic systems. He said that as a student, it can be difficult to connect to the outside world and to the broader veteran community. The transition from active duty to student life presented a struggle to find purpose and impact.

“WCC gives me the opportunity to address both of those issues; I’m working for a good cause, which is hugely beneficial to my overall well-being, and volunteering with the dogs really scratches the ‘service to community and country’ itch that I often feel isn’t adequately stimulated as a student,” Johnson said. “Also, working with dogs is shown to release oxytocin in humans, and that just feels good.”

The students’ volunteer-training lasts until the dogs are ready to be paired with a veteran, with whom they live permanently.

Through OMAC, Stanford student-veterans have been collaborating with WCC for several years. Although the program currently consists of students who have served in the military, Walters said that they hope to open the program up to other Stanford community members once restrictions on gatherings are lifted.

“We’d like to get non-veterans involved in some way,” he said. “Possibly through workshops or meet-and-greets so people can engage with the animals, which is good for mental health.”