Delray Teen And His Service Dog 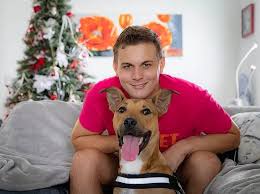 Shane Koch is spreading awareness about Tourette’s Syndrome with his viral “Callum the Ridgy” TikTok page.

The 16-year-old’s connection with his dog has garnered more than 1.4 million followers.

“I created the page to show awareness, to show that you are not different nor normal and it’s better to be weird than normal,” said Koch.

Callum has been by Koch’s side for almost a year, helping him when traditional treatments wouldn’t.

“He notices when I do the ticks, he’ll nudge me.” Said Koch. “He can literally sense when I do those ticks and as I feel it coming and a lot of that stress will go away.”

Koch was diagnosed with Tourette’s Syndrome at eight years old and nothing doctors suggested made his symptoms go away.

Koch explained his journey was not always easy saying “I got made fun of by teachers and students, sometimes I would get in trouble for them.”

Koch says Callum has helped to control the repetitive tics and sounds, and his social media page has given him a voice to tell other kids that different is OK.

The teen says Callum has been by his side for almost a year and since his tics have been under control.

“My dog is what helps me with my Tourettes,” said Koch to CBS 12 News. “Having a dog, it doesn’t even need to be a therapy dog, it will just distract you and want to play, and he just helps so much.”