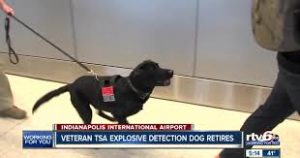 The explosive detection dog at Indianapolis International Airport is retiring after eight years with the Transportation Security Administration.

TTirado’s last day on the job was May 29. Handler Keith Gray celebrated his partner’s retirement at a private ceremony.

TTirado is named in honor of New York firefighter Hector Luis Tirado, Jr., who died in service on 9/11.

He’s one of the few remaining dogs from the TSA-bred puppy program. He graduated in the third class of passenger screening canines trained at Lackland Air Force Base in San Antonio, Texas, in 2012.

“I am thankful for such a fantastic partner in TTirado as my first dog,” Gray said. “He has taught me a lot over the years, and I have been amazed in his growth and how far we have come.”

TTirado’s duties weren’t limited to the airport. He also helped during security operations for the Indianapolis 500, the NCAA Final Four, Kentucky Derby, Super Bowl and the 2017 presidential inauguration.

Gray hopes to take TTirado on a few trips in the near future.

“I have three travel objectives for TTirado – New York City for the Ground Zero Memorial and FDNY Station 23 where his namesake worked, Atlanta to meet one of Hector’s sons and his family who we have kept in touch with, and finally to San Antonio to see his foster family who helped raise him during his puppy years,” Gray said.

TTirado, who will be adopted by Gray’s family, will live at their home in Indianapolis. Gray’s new partner, Ari, will be sure to give him updates on the happenings at work.