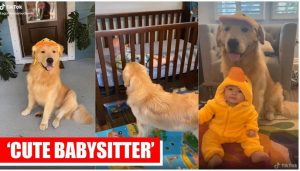 A video of a golden retriever dog named Kevin babysitting a toddler named Hank has left the internet in awe. Shared on the dog’s official TikTok handle, the clip depicts the care and love that the dog bestows on the kid as he dons a yellow “caretaker” duck cap while cradling the baby and helping the owner in changing his diapers. The clip has amassed over 31.8k likes and is captioned as “Kevin babysat a baby”.

As per the dog’s Instagram account, the retriever lives in Orlando, Florida with his owner and has several videos of him distracting his owner while she works from home. However, in the babysitting video where the furry canine wears a duck hat, he can be seen as a responsible pet as he assists in looking after the kid in the household. In one other video, the doggo can be seen wearing a zebra hat as he smiles for the camera. He has even been a participant at the “White Paw Challenge” with other famous dogs of Instagram. The videos have garnered millions of views as Kevin takes the internet by storm with each adorable move.