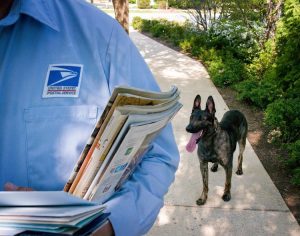 An age-old game of cat and mouse between postal service carriers and dogs is more true than many might think.

In 2019, there was a total of 5,803 U.S. Postal Service employees across the nation attacked by dogs, including three in Orem, one in Provo, two in Santaquin and one in Spanish Fork.

Last year was the second year in a row that the number of dog attacks on Postal Service letter carriers dropped. In 2018, more than 200 more mail carriers were attacked by dogs compared to last year’s numbers, and two years before than in 2017, more than 400 more were attacked.

“Even during these difficult times, it’s important for our customers to understand that letter carriers are still coming to homes daily and need to deliver mail safely,” safety awareness program manager Chris Johnson said in a statement.

While the number of Postal Service employees attacked by dogs has significantly decreased, the organization is taking time to educate patrons about ways to minimize risk for letter carriers during National Dog Bite Awareness Week.

Christopher Reid has worked with the Postal Service in Orem for over 15 years. Starting as a clerk, Reid made the transition to letter carrier 2 years ago and has loved it ever since.

“I couldn’t picture myself doing anything else,” he said. “I love the time I get to spend outside in the fresh air and getting to talk with so many different people.”

Of all of the hazards involved in performing his daily tasks, the one that Reid runs into the most, he said, is dogs.

Throughout his time as a letter carrier, Reid said his experiences with most dogs and their owners has been respectful.

Reid had heard and seen the aftermath of dog attacks in the past, but he hadn’t had his own experiences until months into working his routes.

On the afternoon of Black Friday in 2019, Reid was wrapping up his routes when he stopped at a home to pick up a parcel from a mailbox that was mounted to the residence.

“I guess the woman thought I was her husband coming home, so she opened the door,” he said. “Before we could do anything, the dog just went straight around and bit me on the leg.”

It was only a matter of moments before the woman was able to gain control of her dog and take him back inside, but it was long enough for Reid to be wary when approaching other residences.

In an effort to protect its letter carriers, the Postal Service has mandatory training to help its employees know what to do and when to leave.

“It’s just being aware of your surroundings and trying to be safe,” Reid said.

Letter carriers are trained to rattle fences or gates in an attempt to check if a dog is present and out of sight before entering a yard to drop off or pick up mail. Employees are also advised not to deliver or pick up mail if they feel threatened by a dog, whether that dog is restrained or not.

The Postal Service will then contact the homeowner to schedule times to pick up or drop off their mail at a post office facility until the letter carrier is assured that the pet has been restrained.

Furthermore, if a pet frequently roams the neighborhood and the letter carrier feels threatened, neighbors of the dog’s owner may also be asked to pick up and drop off their mail at a facility.

There are a number of ways that residents can help minimize letter carriers’ risk of being attacked by a dog.

When a letter carrier arrives to deliver to or pick up mail at a residence, homeowners should place their pets in a separate room with the door closed before opening the front door, Reid said. This is because dogs have been known to burst through screen or glass doors to attack letter carriers.

Additionally, parents should remind their children and other family members not to accept mail from letter carriers in the presence of a family pet as a dog may view a U.S. Postal Service employee as a threatening presence.

“The dog could see that as a hostile action and come and charge us, as well,” Reid said. “Normally, we’re not supposed to hand mail to children anyway, but we don’t necessarily hand it to any family member if there’s a dog out.”

Technology is also helping carriers stay safe while completing their routes. Mobile delivery services, which involved the handheld scanners carriers use to confirm customer deliveries, include a feature that allows others to indicate the presence of a dog at an individual’s address.

Another software, called the Informed Delivery, alerts residents that mail is on the way to their homes, which allows the residents time to plan for the carrier’s arrival by securing their dogs in another room.

Reid said, through everything, he does not blame dogs for wanting to protect their homes and families, but dog owners should be aware of these behaviors to ensure the safety of all of those involved letter and package hand offs.