Dog Day At The Pool 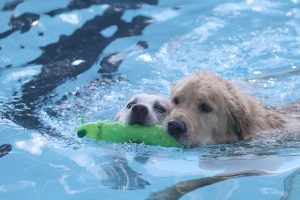 The dog days of summer are over, but the dogs stretched it out one final day at the Rocky River Recreation Center pool Tuesday evening.

The pool closed to people at the end of Labor Day, and so the dogs received a chance Wednesday to splash, play fetch and make new friends with a pool party before it is drained for the season.

About two dozen dogs attended the two hour-long sessions with their owners on a perfectly hot summer evening.

Some dogs were a little hesitant and slowly made their way into the pool, whereas other sprinted into the pool full speed ahead soaking anybody nearby as they landed in the cool water.

Ester Schrager of Rocky River was there with Gari, a 13-year-old German Shepherd who spent 12 years as her service dog.

“Last year we really had a lot fun here, this year he’s just enjoying swimming around,” Schrager said as they sat by the poolside watching the other dogs splash and play.

Owners were allowed to go into the water up to their waist with their dogs if the pooch was hesitant about going in. A $2 donation was requested from owners as they came. The event was open to Rocky River residents, who had to register in advance.

Watch video as reporter Hannah Drown follows the pooches around the pool.