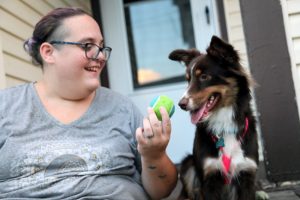 Since the coronavirus pandemic started shutting down music venues, bars, and restaurants in March, local musicians have had to make some big adjustments in their lives. Katie Evans has made one of the biggest – starting her own business.

That’s not an easy thing to do in these uncertain times, but after working at PetSmart as a dog trainer for the last year and a half, the 32-year-old singer/songwriter had the knowledge to strike out on her own and deliver her services to the homes people are largely stuck in.

“At PetSmart, I taught puppy classes as well as advanced classes. There were also times I would have private sessions to work on dogs with behavior issues that may have been abused then adopted into a new family. A lot of times people get a dog and don’t realize how much work it would be, especially if they had a bad past. It’s externally rewarding when a dog ends up staying with the family instead of returned and possibly euthanized. Every dog is trainable with patience and consistency,” Evans said.

“I learned so much and made so many great relationships with pet parents and their dogs. I did have a few cases where, being in a store setting, I couldn’t train due to aggression, which is one reason why I wanted to go off on my own and do in-home training.”

With the store shut down, she used her time off to rework her training material and personalize it. “I was on furlough and also don’t feel safe being in public. I feel most people don’t want to either, another added benefit to my in-home training. I also offer virtual contactless basic puppy training classes online,” she noted. “I used to get hit up all the time online if I could train someone’s dog outside of PetSmart and legally I was unable to. The pandemic happened and it kind of just made sense to start doing it now.”

In addition to in-person training and online video chat sessions, Evans can assist with attention, impulse control, and leash walking, as well as dog walking and pet sitting. She also has a smart and faithful assistant – her 1-year-old mini Australian shepherd, Willow, who has been by her side since she was a puppy, the runt of the litter. “I got her to help me with my training and for that love that dogs give pet owners. She’s such a sweet girl. We did have a rough start when I first got her. We didn’t expect to have our life uprooted, but with moving around several places last summer, she did a great job adjusting. She’s a fast leaner and is going to help me save dogs and keep them happy in their homes,” Evans said.

“She thinks she is a human. She loves people – everyone. You walk in my house, you have a new best friend. She loves attention and to give kisses. She also loves food.”

Willow was a quick study, so she has been able to tag along with her human mom just about everywhere, even when she pushes her cuteness as far as it can go.

“In the beginning, she took amazingly to the basics. Currently we are working on jumping and reactions to stimulus. She’s only 1. I’m very lucky because for a 1-year-old puppy, I can leave my guitar cables around and other crap of mine and she won’t chew or eat anything, unless it’s garbage and food left behind. If I’m around, I can easily tell her ‘leave it’ or ‘drop it’ and redirect her, but if my eyes are not on her, she will totally try and push her luck. I’m a dog trainer, so you think it would be easier for me to train her, but have you seen that face?” she pointed out with a laugh.

Typically, Evans performs with her friend and fellow singer/songwriter Candi Vee as KANTIi. The duo recently moved to South Scranton together and, before the pandemic, booking gigs was relatively easy, whether it was four-hour cover sets or their original material. Five months into the pandemic, though, they haven’t been able to book anything, even with some businesses opening with limited capacity, so they’ve used that time to sharpen up their setlist and play a few live streams from home.

“It doesn’t give me the same joy as a stage with that raw energy. But, like my fellow musicians, it’s better to play to a rectangle, or an empty bar, than to nothing at all,” she admitted.

“I sit in my room sometimes and start to play, and it’s been so long that I feel empty. I have no outlet. It’s the same thing as not being able to attend a concert. Watching live stream shows of my favorite bands is super cool. I’m glad they are doing it, but it’s just not the same. I miss the pit, the smell of a smoke machine, the bass pounding in my chest.”

Evans has been playing music since she was 13 years old, first picking up the drums and then guitar. For Christmas, her mother bought her a keyboard that she has learned how to play, influenced by many different genres and artists.

“Right now, I’m working on piano parts for everything I’ve written. I may need to invest in a looper pedal… but I’ve also been eyeing up a keytar,” she said.

“KANTIi is currently made up of myself and Candi. We have friends that join us on stage to help fill the sound. We actually will be looking to get a permanent drummer. I would also love a violinist, so if anyone is interested, you can message me on Facebook under KANTIi.”

Evans recorded a solo EP at JL Studios in Olyphant in 2015, and she and Candi have since recorded one of their songs together called “Focus.”

“If anyone has gone to a NEPA Scene open mic, they have definitely heard it before. Our good friends in Kali Ma and the Garland of Arms not only recorded it for us, but their drummer Shiny [Montini] played the drums. We have some finishing touches to put on it still, but we hope to release it soon.”

They’re hoping to play more shows as a duo and a full band at some point this year, but with regulations continually changing, her “focus” now is on dog training.