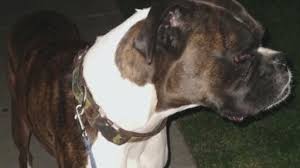 A Navy veteran says he is beside himself after his service dog in training was stolen earlier in the week.

Brett Hart is asking people in Denver’s Capitol Hill neighborhood to keep an eye out for his dog Millie, a young brindle-colored Boxer with a chipped left front tooth. Hart says he got Millie from a homeless man just weeks ago after finding her in bad physical shape. He says he recently lost his previous service dog, and had already enrolled Millie in classes to become certified.

“I have PTSD and the dog keeps me mellow, keeps me in check. I just feel like I have to be a better person when I’m around the dog,” said Hart.

Hart says late Tuesday night, the man he bought the dog from approached him while he was walking near East 13th Avenue and North Logan Street, and wanted to see the dog. Hart says he offered to walk Millie down to the homeless camp nearby to allow them to see her. He says that’s when several people attacked him and ran off with Millie.

Hart filed a report with the Denver Police Department. He says the past few days without Millie have been difficult.

“It’s been horrible. I look over and there’s an empty food dish and everything else. It just makes me weak,” said Hart.

Hart says Millie also responds to the name “Audi.” He advises anyone who spots her, do not approach the people she’s with. Instead, call police.

Denver police do not have any suspect information to provide at this time.