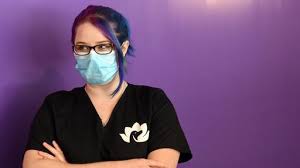 Caring for animals has long been deeply important to Brittney Cook, who as a child would hold funerals for rodents that cats used to kill and leave outside her home.

“I just want this to be somewhere people can bring their dogs and not be stressed out about it,” Cook said. “Dogs who have anxiety are close to my heart. I want to see them do well and grow and feel comfortable.”

Transfurmations opened Aug. 15 after three months of renovations at 26 North Main St., which was vacant.

Cook said she developed a love for pet grooming while she worked at Petco when she was 18. For the past several years, she had been apprenticing under Jennifer Batchelder at Batchelder’s the Grooming Shop By A Furry Affair in Concord.

“I learned so much from her,” Cook said. “I didn’t always want to be a dog groomer. I liked science and biology in school and thought that’s what I wanted to do, but it wasn’t for me. I found dog grooming and I thought this was something I want to do forever immediately. I love it.”

Cook said she chose downtown Rochester because she lives down the street and routinely walks her own dogs, a 7-year-old husky named Amani and a 1-year-old standard poodle named Roman, past the vacant 26 North Main St.

Despite the economic uncertainty of the COVID-19 pandemic, Cook said she pushed forward and rented the space. “I’m really passionate about what I do,” she said. “I was determined to make it happen.”

Cook said she’s excited to be able to play a role in downtown’s revitalization and help build the community. She’s also excited about the potential opportunity that could come from the fact Transfurmations is next door to Luxe Hair Studio, which recently relocated to 22 North Main St. from Dover.

“You could take your dog here and get your spa day in, too,” Cook said, adding Luxe is among the downtown businesses who have become clients at Transfurmations.