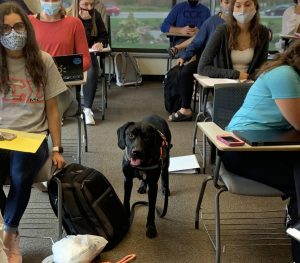 Imagine being excited to attend a difficult class, not only to learn, but to embrace the calm and comforting atmosphere of having a dog or other pet in the classroom.

Heather Vitko, an Assistant Professor of Nursing, hopes to make this vision a reality for nursing students at SFU to experience.

“Health science (fields) are intensive majors, with high-stakes exams, which often cause stress and anxiety for students,” said Vitko.

“What would be better than to pet a dog after not doing so hot on a test?”

Vitko said that researchers who have explored animal-assisted therapy have found significant differences in vital signs in patients in intensive care unit who have been exposed to dogs, versus those who have not.

“Research shows a reduction in heart rate and blood pressure when ICU patients on ventilators pet or have contact with a dog,” said Vitko.

The nursing faculty member is a firm believer in animal therapy, especially in today’s educational setting, when more and more students are struggling with depression and many are being prescribed anxiety medication.

“Panther has been the opposite of a disruption,” said Vitko. “He’s wonderful and very well-behaved.

“He lightens things up a little bit because we will be getting into some intense subject matter and I see the students start to zone out. All of a sudden, here comes Panther, barreling up to me at the lectern because he wants a cookie.

“This sort of wakes the students up and helps them to refocus.”

Several universities currently offer fields of study in animal therapy, and some nursing programs have a department pet that comforts students when they need it.

“The benefit of animals to humans’ emotional and psychological well-being is well-documented,” said Vitko.