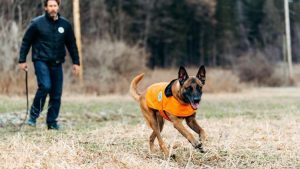 A group at the NY NJ Trial Conference, which hosts the Lower Hudson Partnership for Regional Invasive Species Management (PRISM), a partner with Cornell Cooperative Extension (CCE), started training dogs in 2018 to recognize scotch broom, an invasive shrub, and spotted lantern flies, invasive pests that feed on grapes, apples and other plant species.

In March, Karen Snover-Clift, director of the Cornell University Plant Disease Diagnostic Clinic (CUPDDC), helped conservation dog handlers teach the dogs to recognize and seek out oak wilt, a devastating oak disease that has appeared in a few areas in New York state.

By all measures, the dogs previously proved how effective they were at locating an invasive plant and insect. Dog handlers Joshua Beese from the Trail Conference and Aimee Hurt, a mentor from Working Dogs for Conservation, had also trained the dogs to sniff out oak wilt, a plant pathogen that can kill a tree in just three weeks and once infected, there is no cure.

“When we talk about protecting our forests and keeping out these invasive plant pathogens, our primary goal is to find them as quickly as possible because that increases our chances of having a successful eradication,” Snover-Clift said. “So I think that introducing the dogs to this program would allow us to do that more quickly and more successfully.”

In November 2018, Snover-Clift attended an Agriculture, Food & Environmental Systems In-service conference through CCE, which brought together faculty, educators and industry professionals from various agricultural fields to discuss the latest developments in research and practice. She attended a session on using dogs to identify invasive weeds and insects, presented by Working Dogs for Conservation, a Montana-based group that was training staff at the NY NJ Trail Conference-PRISM.

After the session, Snover-Clift spoke with Linda Rohleder, the director of the NY NJ Trail Conference-PRISM, who was pursuing a grant to determine if dogs could effectively detect key invasive species in New York. Snover-Clift suggested using the oak wilt pathogen for the project because it is a devastating pathogen, it is spreading very slowly and it can smell like stale beer or bread yeast, to humans.

Beese, located a young Labrador from Wisconsin, named Dia, with the right temperament for the job.

“You need a dog that is probably not the world’s best pet,” Snover-Clift said. “You need one that is very high-energy and will want to keep playing for us … keep finding their target.”

Immediately following the initial training at Cornell and with the help of Rob Cole, the state Department of Environmental Conservation’s oak wilt response incident commander, the group tested the dogs in real-world conditions, where oak wilt had been detected and trees were removed in Ontario and Yates counties. In both locations, the dogs performed extremely well.

In Yates County, for example, a tree had been cut down in February, before spring when beetles can spread the fungus. The dogs each alerted on the positive tree stump and treated logs. In the same area, nine living oaks stood within a root zone where the fungus could spread infection underground.

The trees were flagged and numbered, 1-9; both dogs independently showed great interest in trees 1, 7 and 8. Both dogs also alerted on another tree that had fallen the previous year, near the positive oak wilt stump.

Additional sites were visited and encouraging observations noted. All involved felt this was a very successful proof of concept and with support and additional training, Dia and Fagen can help us minimize the damage caused to our oaks by the oak wilt pathogen.

Snover-Clift hopes to secure funding to further train dogs to detect oak wilt and then hopefully branch out to other organisms.

“Knowing what the conservation dogs in Montana have done, I’m sure we can broaden Dia and Fagen’s targets.” Snover-Clift said. “And we have a long list of organisms that are harmful to our crops and natural systems here in New York state. The dogs have shown us that they can do this.”