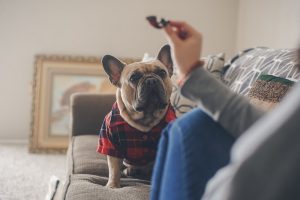 The goal of treatment is to teach the dog how to be calm and relaxed during the owner’s absence.  It involves changes in pet-owner interactions, changes in leaving and return protocols, decreasing the anxiety associated with owner departure, teaching the dog how to be left alone, environmental changes and management, and sometimes the use of anti-anxiety medication.

For the dogs who have distress only when crated or enclosed in a small space, treatment can be very simple and straightforward – let the dog out of the crate/small space.

However, for the dogs who have learned that departures and/or being alone is scary there is more homework for owners.  First, owners need to address the actions/cues that predict their departure.  This can be done in a number of ways: 1) They can get rid of the cues.  For example: briefcases can be packed and put into the car the night before; The car can be taken out of the garage hours before departure so that there is no longer the predictive sound of the garage door going up and down. 2) The dog can be habituated to the cues.  This is done by the owner repeating the action over and over – but never leaving.  For example: Pick up keys and walk around the house.  Pick up keys, go into the kitchen and cook dinner.  Pick up keys, sit down and read a book.  Over time, the dog will no longer react to the sound of the keys – because it no longer has a predictive quality.  During this time, for actual departures, the keys would need to be put into a pocket, etc. so that the dog doesn’t hear the sound as the owner leaves.  3) Classical conditioning can be used for good!  The negative action [putting on certain shoes] can be turned into a positive one by pairing it with a special treat.  So, instead of “See dad putting on loafers and panic because he’s leaving!” it becomes “See dad putting on loafers and look for a yummy treat!”

Once the cues are no longer predictive of a departure, owners can start leaving for longer and longer periods of time – teaching the dog that it can be alone.

Teaching the Dog to be Left Alone at Home – This involves the implementation of graduated planned departures GPDs, which use short absences to desensitize the dog to the owner leaving and being gone.  Prior to this part of the treatment, the dog must have already been habituated to departure cues and desensitized to approaches to the door, etc.

GPDs are like REAL departures with two exceptions: 1) Initially the absences are very short, and 2) As the owner departs, he/she leaves a new and consistent “safety cue” or signal for the dog.  Classical conditioning is used such that a neutral stimulus is paired with a conditioned stimulus and results in a conditioned response.  In this case, the neutral stimulus, NS = owner departure.  The conditioned stimulus, CS = “safety cue”.  And the conditioned response, CR = good behavior, feeling relaxed.  The safety cue can be auditory (bell), visual (a towel or rug that is put down just prior to departure), or a combination of auditory, visual, and olfactory – such as spraying a can of potpourri.

Environmental Changes and Management – Suggestions include: increased play and exercise, “Doggie Day Care”, gradual conditioning to crate (can be good with some dogs, disastrous with others…), “mixing up” departure cues, masking departure with noise while dog is busy with toy in another room, etc.

Medications used to decrease anxiety and panic can be very helpful in the treatment of separation-related behaviors.  Generally, there are two groups of medications to consider: 1) Long-term, daily-administered medications, and 2) The as-needed medications for departures only.

Keeping in mind that the goal is for the dog to not experience anxiety, use of a daily “maintenance” medication along with a fast-acting, short-duration medication may be warranted.  Clomicalm™ (clomipramine), a tricyclic antidepressant and Reconcile™, an SSRI are both FDA-approved for use in dogs with separation anxiety.  It provides the long-term maintenance treatment, and will help to decrease the dog’s overall level of anxiety.  Reconcile™ is administered once a day at the dose of 1-2mg/kg.  Clomicalm™ is administered at 1-2mg/kg BID.  Both of these medications are given daily and generally take several weeks to reach peak effects.