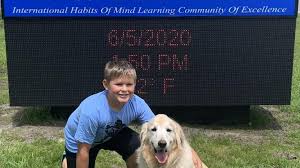 William and Soya celebrated several milestones together this month as they graduated from fifth grade at Parkwood Elementary School.

The two have grown up together, gone through school together and have been pretty much inseparable for the past six years but will be taking somewhat different paths once the new school year begins.

William Dedmond will be attending New Bridge Middle School and Soya, his service dog, will be retiring from her school duties.

“It will be weird,” William, 11, said when asked how it is going to feel not having Soya with him at school.

He had to think a minute before answering; he’s never really known otherwise. Soya has always been close by, either at his desk or within close range in his classroom.

Classmates asked about Soya when she stayed home for a day and Soya got her own photo in the school yearbook. She was a part of the Parkwood School community.

“When Soya was there I didn’t really think of her as a dog, she was like a student,” William said of having a service dog with him at school.

William, the son of Jason and Melissa Dedmond of Jacksonville, was diagnosed with epilepsy at 9 months old and Soya has been at his side since he was 4 years old and still in preschool.

Soya, a Golden Retriever, is trained as a Seizure Assistance Dog, which alerts others through smell as to when a seizure occurs or is going to occur.

Jason Dedmond said Soya can alert them as early as 45 minutes before a seizure.

The good news is that William had his first normal electroencephalogram (EEG) a year and a half ago and has been able to come off the medications that have long been needed to manage the seizures.

With the latest test results, William is able to head to middle school without needing a service dog with him.

While Soya will still be around to watch over him, the Dedmonds hope William has outgrown the seizures. His last grand mal seizure was at age 5.

Jason Dedmond said that from 9 months old to age 5 William had many types of seizures, at times two or more a week.

“You name a seizure, he’s had it,” Dedmond said.

When the seizures were at their worst and most frequent, the Dedmonds were barely able to sleep as they kept watch.

Jason said his wife began researching service dogs and they found the organization 4 Paws for Ability in Ohio, which trains service dogs for children.

Through a community fundraiser, Wags for William, they raised the $13,000 needed to get a service dog and an additional $7,000 that was contributed to help another family in line for a service dog.

The family traveled to Ohio for two weeks for their part in the training and brought Soya in Jan. 2014 when she was 13 months old. She was named Soyala, which means winter solstice in American Indian because that is when she was born.

Jason said that when William entered kindergarten at Parkwood Elementary, he joined his son at school for a week to help train the teachers and school staff.

The teachers knew what to do if there was a “Code Purple” and Soyala alerted them to a seizure.

It happened often while William was in preschool at First Baptist Church, now Catalyst Church. Fortunately, Dedmond said, there was not a Code Purple for William while he was a Parkwood.

“We were very blessed,” he said.

The school, he said, was always very supportive and as well as the school district, which updated its policies related to service dogs at schools at the time Soya and William began school at Parkwood Elementary.

As William heads on to middle school, one thing won’t change: the bond he has with Soya.

William smiles as he remembers the Halloween costumes they’ve shared.

“She was a super hero for Halloween,” he said.

It seems fitting for a dog he says has super powers.

Soya plans to retire to normal dog duties and will be spending more time with the second K9 in the family. Alexa, a Golden retriever and Labrador retriever mix, joined the family two years ago for William’s older brother, Dylan.

Alexa is also trained but wasn’t quite suited for work as a service dog and was adopted from the same organization as one of their “fabulous flunkies.”