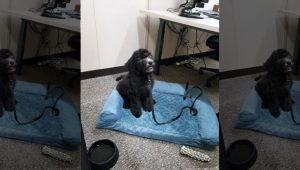 In a news release, the attorney’s office said the decision to get an emotional support dog was based on scientific research showing the benefits of having a dog working with individuals in a courthouse, courtroom or legal office.

“Having an emotional support animal like Barrett in our office will provide much needed stress and anxiety-relief to our staff members, as well as the witnesses and victims we work with during cases,” Freeman said a statement. “Research suggests that having emotional support animals working in courthouses and other legal offices provides comfort and creates a less threatening environment for victims and witnesses.”

A dog trainer with Augusta Dog Training is training Barrett. Barrett currently lives with one the attorney’s office employees.