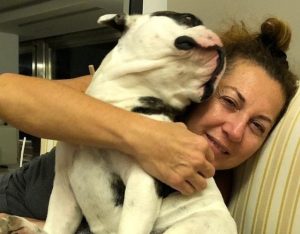 A Leukemia patient named Hannah suffered an incredible loss at the hands of a trusted airline. After making the journey from Dubai to Washington for cancer treatment, their landing came with the devastating news that her two beloved French Bulldogs did not survive the flight.

When Hannah discovered that her best option for Leukemia treatment would be in the US, she knew she could not relocate without her two dogs, Panda and Beluga. Not only were Panda and Beluga her very best friends, but Panda was also her emotional support animal. These dogs were her world, so there was no way she could leave them behind.

During Hannah’s preparation for her flight with Emirates, she was told that Panda and Beluga could not fly in the cabin with her since they weighed more than 8 pounds. She was informed that they would instead fly in a specific pet holding area below the cabin, even though she provided medical paperwork claiming Panda as an emotional support animal.

With no other option, Hannah was forced to pay the $2,600 fee to fly her beloved Frenchies in the pet cargo area. This fee includes mandatory pet checks on all stops, as well as ensuring their safety throughout each flight. Unfortunately for Panda and Beluga, they never made it into the pet safe cargo area.

Apparently, at some point throughout their journey, the two Frenchies were put into the luggage cargo hold instead of the pet safe area. As the flight from Dubai to Washington was over 12 hours long, Panda and Beluga died of oxygen deprivation along the way. A necropsy confirmed the cause of death, and also mentioned the presence of blood on Panda.

Other pets on this flight that were placed in the proper pet holding area survived the flight unscathed. This proves that if Panda and Beluga were placed in the pet safe area, they likely would be here with Hannah today. Hannah was absolutely heartbroken when they delivered the devastating news upon her landing in Washington. Not only is she grieving the loss of her furry family members, but she is still fighting an epic battle with leukemia. This is more stress than anyone should have to bear. Hannah has enlisted the help of an attorney to help bring justice for the loss of her beloved French Bulldogs. Evan Oshan is dedicated to fighting in the memory of Panda and Beluga and helping to make sure this never happens again. We are sending our love to Hannah and her family during this difficult time, and hope that Panda and Beluga receive the justice they deserve.