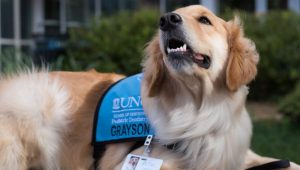 NC dental board could put limits on emotional support animals inside dental facilities.

The thought of going to the dentist can instill anxiety and panic in some, especially children.

The UNC-Chapel Hill School of Dentistry brought in a new team member in October 2018 to help soothe fearful little ones getting care at their pediatrics dentistry clinic.

Grayson, a golden retriever with a Paws4People graduation certificate, is a facility dog that has gained quite the reputation as an emotional healer in the clinic.

With her special work vest on, Grayson has been known to hop into the dentist’s chair to rest her head on the lap of a child who might need a tooth pulled, filled or be worried about a routine cleaning.

That could change if an amendment to an infection control and sterilization rule goes forward as proposed by the North Carolina State Board of Dental Examiners.

In August, the board sent a proposed change to the Rules Review Commission, an executive agency created by the General Assembly more than three decades ago to analyze rules of various state agencies.

The dental board proposal would limit where therapy dogs and other animals that are not qualified service dogs, as defined by the Americans With Disabilities Act, could go in clinical dental settings.

The topic came up during a briefing to the board by Douglas Brocker, the attorney who advises the organization overseeing the practice of dentistry in North Carolina.

Turning guidelines into regulations
Shortly after Gov. Roy Cooper eased the statewide stay-at-home order to allow dentists to provide more than the emergency care they were limited to in the early months of the coronavirus pandemic, the board began receiving complaints that some practices were not adhering to American Dental Association COVID-19 safety guidelines.

“Even before COVID, we were having complaints about sterilization and infection control, and as we looked through, it became very difficult to try to enforce,” Brocker said. “There just isn’t much substance in the sterilization rules.”

The problem was many of the safety and infection control protocols were recommendations, not requirements with regulatory teeth to them. That makes it difficult for the board to impose sanctions against dentists not following the guidelines.

The board could go through a comprehensive analysis and rewriting of the protocols, a process that would require lots of hearings and lots of input.

Instead, Brocker suggested that North Carolina follow the path of other states that have adopted the Centers for Disease Control and Prevention guidelines as requirements of their dental boards.

It will be up to the Rules Review Commission to determine whether the proposal is too extensive a change to simply amend the rule. If that’s the case, then the board would have to open up the process to the more traditional and time-consuming amending of law.

Even if the rules commission agrees that the change can be made without legislation, there will be a public comment period that could potentially put the issue in front of lawmakers, nonetheless.

The portion of the proposal sent to the Rules Review Commission about animals states:

“No animals shall be allowed in any area of a dental office where clinical work is being performed except service animals in accordance with GS 168-4.2 and the Americans with Disabilities Act.”

The language now prohibits animals except “certified assistance animals required to assist disabled individuals,” lacking clarity on which animals and how much training is necessary to meet that definition.

Bobby White, the chief executive officer and legal counsel for the North Carolina Board of Dental Examiners, said recently that complaints had been coming in about therapy dogs and animals in dental offices.

“Some people like seeing the animals and others do not,” White said.

Beloved Grayson
At its August meeting, the dental board mentioned Grayson by name and asked whether she would be out of a job because of the change.

Alec Parker, executive director of the North Carolina Dental Society and a dog lover, has seen the power a pup can have in dental facilities.

When he was in private practice, a hygienist on his team often brought her dog to work. It provided many a nuzzle and warm companionship to patients in the waiting room.

Parker also is familiar with Grayson.

Under the rule change as written, facility animals could be in reception areas but not in dental chairs and clinical settings.

“I know that Grayson is beloved,” Parker said. “She may not have the freedom to roam the halls anymore, but I think it would be OK for her to be there as long as she’s in the reception area.”

Vest off, hair comes down a bit

Grayson came to UNC as a 2-year-old.

As a puppy, Paws4People sent her to the West Virginia prison system where she was trained for nearly a year, learning the basics of being a facility dog.

After a year, Grayson returned to Wilmington, where she got more training as a therapy dog.

As Grayson’s chief handler and housemate during their downtime, Saemundsson noted that Grayson has worked with people in wheelchairs. Through more than 1,000 hours of training, Grayson has learned how to push buttons and open doors, even open a refrigerator under the right circumstances.

During the week, Grayson is mostly inside at the pediatric clinic, except for the couple of times during the workday when she gets a walk outside to some of the grassy areas near the building.

“When she gets home, we get more relaxed,” Saemundsson said. “We take her vest off. She becomes sort of a different dog when that happens, more relaxed. She sort of lets her hair down.”

At the clinic, her professional therapy dog demeanor returns.

Danielle Cockerham, deputy executive director of operations and information technology at Paws4People, said this week that her organization understands the need for standards, but she thinks there might be a way to add facility animals, such as those with the extensive training provided to Grayson, as acceptable, too.

Facility dogs are trained for their specific environment, Cockerham said, so in this case being able to perform the deep pressure and to de-escalate the anxiety of the patient during the treatment and appointment is what sets Grayson apart from therapy animals.

Paws4People, which is accredited by both Assistance Dogs International and Animal Assisted Intervention International, and UNC dental school representatives plan to outline a broader definition for the board to consider.

“We are in support of more standards as we know and understand that people are taking advantage by taking their non-certified, non-credentialed pets in,” Cockerham said.

During the dental board meeting in August, the attorneys elaborated on why they were sticking with the service animal definition in the federal disabilities act.

“The problem is if you get away from the ADA service animal it pretty much opens it up to anything,” Brocker said. “Largely anything goes. Your emotional support boa constrictor. You got to kind of draw a line. … There just aren’t many standards when you get out of that area.”

The Rules Review Commission process can take a month or two. If the commission decides it’s a change that falls within the realm of rule changing, the dental board will publish the proposed change on its web site and seek comments.

They expect to hear from people.

“When you’re dealing with pets and children, I think publication of this rule will bring that out,” White, the board’s chief executive director, told members last month.

He reiterated that in mid-September.

“I imagine we’re going to hear a lot about this,” White said.