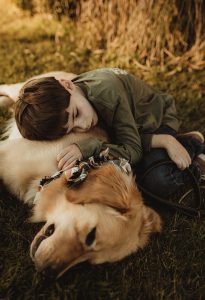 On Dec. 17, 2012, Nichole and John Flemens’ son, Canton, made his way into the world, but their lives would be changed forever a couple of months later when they learned that Canton had a stroke in utero.

They went through therapy with their son, and things were progressing well when they learned shortly before his third birthday that Canton was going to have seizures for the rest of his life. Canton was diagnosed with Lennox-Gastaut Syndrome, a difficult to treat form of epilepsy where seizures often do not respond to anti-seizure medication. Those with Lennox-Gastaut Syndrome can have different types of seizures; Nichole Flemens said her son will have three to five seizures a day, sometimes more, sometimes less, depending on what is going on.

Due to the seizures, Canton lost his ability to walk, and his mother said he does not talk as much as he used to; he does still give nuzzles and kisses, expressing his love to his parents when they are with him.

A school nurse for the Magnolia Kindergarten, Nichole Flemens said she is an advocate for children with special needs because she knows how it feels as a parent to have her child looked at like they are different.

“Most people fall in love when they meet him,” she said over the phone, choking up as she spoke.

“I think God definitely put Canton with us for a reason. People tell me all the time I don’t know how you do this. Some days it’s easier and some days it’s hard, and we know what we have to do because that’s what we were given and you have to make the best of it,” she added.

Nichole Flemens said she was doing research on ways she could help to make Canton’s life easier when she came across the organization 4 Paws for Ability, based in Xenia, Ohio. The organization provides seizure alert dogs, mobility dogs and dogs that can do various things for children.

She contacted the organization, which sent her and info packet. The family applied for a dog and were approved in February of 2018.

“It is kind of (like) a waiting list, but they want to make sure your dog is trained specifically for your needs. The put us on an August, 2020 class time date, but due to corona(virus) we got pushed back to October, 2020,” Nichole Flemens said. “It’s about a two- to three-year long wait for the training process and the match, which is what they call picking the dog for the child.”

She said she was informed the organization puts about $60,000-$80,000 into training a service dog, but because it is a nonprofit, it tries to cover as much as possible through donations. The normal cost for a family is around $17,000.

“Once we got approved, we put it on my Facebook page that Canton would be put on a list to receive a service dog, but due to the cost we would be doing some fundraisers,” Canton’s mother said.

John Flemens was working for Albemarle at that time. One of his coworkers reached out to the family and suggested that the Albemarle Foundation could host a barbecue, a project the organization has done in the past to raise money for others in need. Nichole Flemens said that was when the ball started rolling on the fundraising.

During late March, 2018 when the fundraiser was held, not only were the employees of Albemarle involved, but the communities of Magnolia, Camden and El Dorado donated money in support of Canton. With the help of contributions from companies, organizations and individuals, the family received more than double their goal in a month’s time.

“It was pretty amazing,” Nichole Flemens said. “The Albemarle Foundation and everybody was amazing. People I don’t even know donated money. There are children that wait three to five years to make the amount of money that we did in less than a month, so sometimes coming from a small town makes a big difference.”

Before their dog’s arrival, Nichole Flemens sent seizure shirts to aid in its training; Canton wears the white shirts, and when he has a seizure, a smell that the dog can recognize is emitted, allowing the dog to alert others to Canton’s seizure.

On October 4, the family made their way to Xenia, Ohio for the training at 4 Paws for Ability, where they finally got to meet Alton, their Labrador Retriever-Golden Retriever-Newfoundland Retriever, in person.

“It is very emotional, but exciting that the dog is so excited to see you,” Nichole Flemens said. “He connected with our family very quickly.”

There was a big reveal day, with 10 people in the class when the dogs were brought out to their families. Alton pre-alerted to one of Canton’s seizures during the training, stepping into action on just the second day of the family’s training period.

They brought Alton home on October 17; Nichole Flemens said now he is another member of the family. She said Alton has adjusted well as the family and working dog. For her children, they got used to having a dog in the home.

“Canton was excited but not real sure at first,” his mother said, adding that Alton would lick all over him. Now, Canton has gotten more comfortable with his new furry friend, letting Alton run all over him and sitting atop the dog himself.

Alton’s training isn’t over yet; he’s now learning to bark when Canton has a seizure in order to alert the rest of the family. Nichole Flemens said this ensures that no matter where in the house she or her husband are, Alton is able to reach them quickly and effectively.

She added that this is all thanks to the members of the community that helped her family bring Alton home.

“All I can say is thank you,” she said. “We have a child who was given a difficult life and people have tried to help us to make that easier for him — not only easier medically, but just to have somebody who can be his friend, and we would never be able to thank everybody but we want to let them know that we appreciated it.”

She said a major thanks goes out to Ouachita, Union and Columbia counties for helping out when they saw a family in need. She said the family is getting ready to start bringing Alton to more places in town, and that if anybody sees him, they can feel free to pet him as long as they ask.