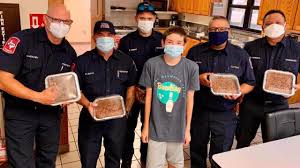 Luke Berridge is 14-years-old and has autism. He is high functioning, but the family says he still can have anxiety and other episodes in which he needs external help. Now that he is growing up, his family wants him to gain more independence. After researching for a few months, his mother Jessica was sold on the idea of a service dog. How much confidence it builds in children with autism, how much more independent they become, and it also serves as a bridge between him and other people socially.

But after finding out how much would money it would cost to not only buy but maintain the dog, they thought of fundraising by baking brownies.

The entire family helped chip in: Luke would pour the batter his sister Natalie made, Jessica would contact and keep track of orders, and father Todd would drive and the family would deliver. It was a full team effort to try and get Luke this dog. It took just two weeks to raise almost $4,000. Anonymous donors poured money in and ordered those brownies to be delivered to front line workers. The amount of support in such a short time was overwhelming. We weren’t expecting this kind of outpouring. We know we are in pretty dire straights at this time. We are all wearing masks and staying away from each other but my goodness this just proves if you have one thing happened good, everyone just wants to be apart of it. Some people donated their brownies and their money and said we’d like you to deliver it to Fire Station Number 5, the Odessa Police Department the Ector County Sheriff (office). Luke had a great time going to the police department, the sheriff department. So we’ve been doing all sorts of different things, it’s been great.

The family posts updates of the baking and dog search on a Facebook page called Luke’s Dog Blog and will soon post the dog with his or her name when they pick him or her out. Until then, Luke want’s to let the community know how much this means to him. Thank you for helping me get my service dog!