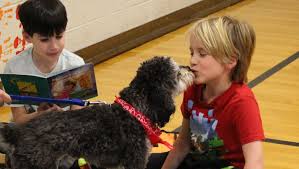 A local school district has a surprise for students when they return to the classroom.

This surprise has four fuzzy legs and a furry wagging tail, and she can’t wait to meet the students.

The district is excited to announce the arrival of the 6-month-old pup.

Melissa Stephanski, is not only Rhys’s caregiver, but the chief academic officer for Warren County Public Schools.

“These dogs can go in and can be in classrooms, they can be at events. If we have a student in crisis or a staff member then we would certainly be able to have our dogs on hand if we need them. Sometimes we have situations where a social worker may come and see a child and a staff member is not able to go in with them because that is their protocol; the dogs can,” said Stephanski.

Rhys is a labradoodle.

She was donated to the school district along with another dog, by Deer Creek Labradoodles of Louisville.

A grant is funding training for the therapy dog.

Dogs brighten people’s day and can provide a sense of comfort that humans cannot always provide according to Betsy Pierce, a therapist at WKU.

“I think dogs read our body language and our emotions because they’re tuned in,” Pierce said. “As people, we can read each other but we’ve usually got 14 other things on our mind at the time, and we are analyzing the awkwardness and ‘what should I say and do,’ and dogs are just there. They are just going to be with you. If you are sad or mad or whatever it is, they are just going to be with you.”A second therapy dog, Beau, will make its way to the Warren County schools sometime in the next few months.