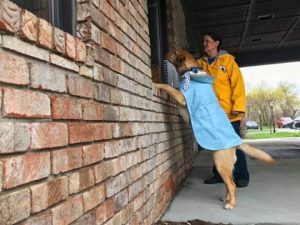 A little bit of rain Thursday afternoon was not enough to keep some special four-legged visitors from brightening the days of retirement and nursing home residents.

Two horses made people smile at Regency-on-the-Lake and Tommy the therapy dog danced outside windows at Lakeshore Woods.

Usually she and Tommy have a couple different visits a day between visiting hospice homes and nursing homes and different schools, but that all came to a halt when the novel coronavirus pandemic hit.

Crowe said Tommy was used to getting all that attention and treats, so it took him a while to get used to staying in.

“He was really kind of hurting there for a few weeks,” she said.

The two have been trying to find different ways to see people while social distancing, like participating in a parade for emergency responders and a Mother’s Day parade in downtown Port Huron.

It’s hard to put hand sanitizer on a dog between every room in a nursing home, so they probably won’t be able to do visits like that for a while, Crowe said.

But they can do outdoor things, like obedience and agility tricks and window visits.

Katie Greene, life enhancement coordinator at Lakeshore Woods in Fort Gratiot, could be seen waving to Tommy through the windows on Thursday. She said they can’t let anyone in the building right now and this is the second-best alternative.

Staff have to get creative with ways to entertain the residents with the pandemic happening and when a visitor like Tommy comes, the residents “instantly light up,” Greene said.

“I think having that contact with the outside world kind of helps,” she said.

They couldn’t open the windows, but residents could be heard “ooing” and “ahhing” at Tommy through the windows during his visit.

“It’s definitely a nice break in the day,” Greene said.

Sandra Ball, activity director for Regency-on-the-Lake in Fort Gratiot, said residents are missing their therapy dogs, which is why they brought in the horses on Thursday.

These visitors give the residents something to see besides the workers’ faces behind a mask, and they try to brighten up their days as much as they can, she said.

Ball said they’re encouraging anyone who wants to bring an animal to call and ask to set it up. She would love to have someone bring a pig or calf to Regency on the Lake for a visit.

Even if it’s someone who wants to play music or do magic outside the windows, they can, Ball said.

She said the residents have to remember there’s more to the world and having a visitor like an animal does that.

“They love it, they brighten up, they’re happy, they talk about it for days,” Ball said.

Crowe said she loves visiting places, and might get more from it than the residents do.

She said this pandemic has been hard on all therapy dog people, whose mission it is to share these dogs they love with people.

“If we can get that one smile, we’re happy,” Crowe said.