From Shelter Dogs To Service Animals 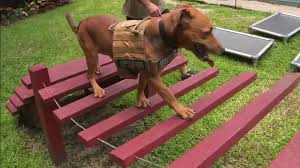 Matt Kleeman was a U.S. Navy Diver stationed in Connecticut when a nearly-fatal car accident left him paralyzed from the neck down and facing an uncertain future.

”I wondered how am I ever going to be independent again, what’s going to stop me, how much can I take things,” Kleeman said.

His determination to move forward led him to an organization called CAMO which stands for Canines Assisting Military Operatives.

The training facility is located on a two-acre piece of property in western Palm Beach County. ”It’s really grown quite a bit. The number of people it supports, the legacy it leaves behind with the dogs and the operators and those in need of the dogs, the awareness is really world wide,” said Joe Muller, a major supporter of the organization.

Founder and chief Trainer Mike Lorraine works with shelter dogs who fit the temperament to become a service animal and pairs them with veterans in need at no cost. ”For sure, getting these dogs out of shelters and then giving them really incredible training for over a year, a year and a half, and then placing them with deserving veterans is a life-long dream that for sure is the most rewarding things I’ve done with dog training,” Lorraine said.

Training these dogs to do everything from turning on a light to picking up keys and coins actually starts with chickens. Lorraine works with the birds first to see what techniques will create the desired response before adopting that approach when training a service dog.

“It’s not so much breed specific, it’s those special attributes we need to see in the dog really wide open, well socialized, super calm and with a really high food drive and if we have these combinations of attributes then for sure we’re going to have success,” Lorraine said.

As Kleeman’s current service dog, named “Charlie Brown,” is starting to show signs of aging, he and Lorraine are now working together to train a second dog, a puppy named “Cooper,”’ to be ready to serve when Charlie Brown needs to retire, though never far from his side. ”He’s my buddy, I’m with him all the time and I can’t imagine life without him,” Kleeman said.

So far CAMO has placed 30 dogs with veterans in need.