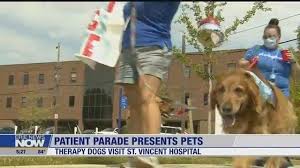 Saint Vincent Hospital was the site of a therapy dog parade Thursday morning.

Therapy Dogs United organized a pet parade for patients for the first time in months.
The group usually brings therapy dogs to visit hospital patients but haven’t been able to lately because of pandemic restrictions.
More than a dozen volunteers paraded their dogs past inpatient windows and the windows of the AHN Cancer Institute.
The group organized a pet parade yesterday at UPMC Hamot.